As inflation continues to rise, so do concerns about a recession. First quarter 2022 GDP (gross domestic product) decreased at an annual rate of -1.6% according to the Bureau of Economic Analysis. GDP is the standard measure of US economic growth, and the most common rule of thumb for determining a recession is two consecutive quarters of negative GDP readings. Second quarter GDP, released on July 28, came in at -0.9%, further heightening already elevated recession concerns. But rules of thumb are just that – they don’t always hold.

So What is a Recession?
There seem to be as many definitions as people you ask. The extreme negativity of consumer sentiment leads many to believe that if things feel so bad, it must be a recession. But the final arbiter of recessions is the National Bureau of Economic Research (NBER), a nonprofit research organization that has been declaring official recession dates since 1920.

Yes, they deserve criticism for their slow and often obvious declarations of the beginning and end of recessions, but the NBER’s definition is far more robust than the two-negative-quarters rule. The NBER defines a recession as a significant decline in economic activity that is spread across the economy and lasts more than a few months, which meets the committee’s view of depth, diffusion and duration. No mention of consecutive quarters or real GDP.

Considering the nuances of this cycle - thanks to the Covid-induced economic sudden stops, restart and ongoing normalization of the post-pandemic economy - this framework may be far more useful than the old two consecutive quarters rule.

Why Does This Look Like a Recession?
Even if you subscribe to the two-quarters rule, there’s good reason to discount the first quarter GDP print and the current data as well. GDP can be subject to significant fluctuations due to the mechanics of its measurement. Specifically, two components can create a lot of noise and, in the case of today’s continuing economic normalization, a lot of distortions: net exports and change in inventories.

Let’s Start With Net Exports
The simple product of robust US consumer demand and weaker global consumption is a massive trade deficit. With the US a largely insulated economy, exports represent a relatively small portion of GDP – on the order of about 10%.

US consumer demand has been strong and requires sizeable imports to meet it. The net effect is a trade deficit: more imports than exports represent a drag on US GDP. That’s not unique, as the US has consistently run a trade deficit for the last 30 years (Figure 1). 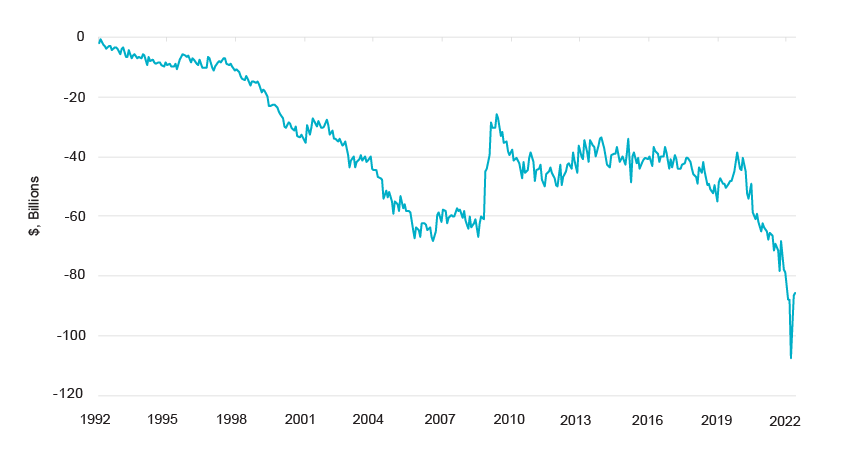 But, as the pandemic drove a massive shift in consumption away from services and toward goods, that trade deficit exploded and accelerated further as global growth has lagged behind US growth. This created a material drag that has led to an average reduction in GDP of 1.6% per quarter since the third quarter of 2020. In Q1 2022, that drag accelerated to 3.2%. The trend of elevated trade deficits continued into Q2, albeit at a more moderate pace, but a sharp drop in goods imports and significant pickup in goods and services exports, likely the result of increased energy exports and international tourism, resulted in a net contribution to GDP growth of 1.4% in Q2. This is a sharp reversal from the drag of preceding quarters, but still clearly showing the fingerprints of the continued post-pandemic normalization and geopolitical events.

The Second Culprit: Change in Inventories
Remember that GDP growth is a flow. A slower rate of inventory growth translates to a drag on overall growth – meaning companies are producing less as they draw down on inventories generated in prior quarters. So, even if inventories are growing, representing increased production and economic activity, if they grow at a slower pace than the prior quarter, it translates into lower GDP growth.

Over time, contributions to growth from inventories tend to net out, but over short windows they can have significant impacts. These impacts have been magnified as the world continues to normalize from the Covid shock. In Q1 2022, inventories grew at the second fastest pace on record, increasing by $188.5 billion. But that was on the heels of the largest inventory growth on record in Q4 2021. The result was a 35bp (0.35%) drag on headline GDP growth.

So what did we see in the second quarter? More of the same. Much-maligned goods shortages have quickly morphed into a supply glut as business inventories have exploded in recent months. Retail inventories (excluding autos, where production is likely to continue to hold up as the well-known semiconductor shortage continues to ease) are now 17% above the pre-pandemic trend.

Too much inventory, paired with continued normalization in consumer spending away from goods and back toward services, means retailers are now rolling out plans for major price discounts to draw down those inventories. As a result, corporates grew inventories at a substantially slower pace of $81.6B in Q2 as compared to breakneck pace in Q1 resulting in a 2% drag on GDP growth (Figure 2). (The good news is price slashing is exactly the help we need on the inflation front.) 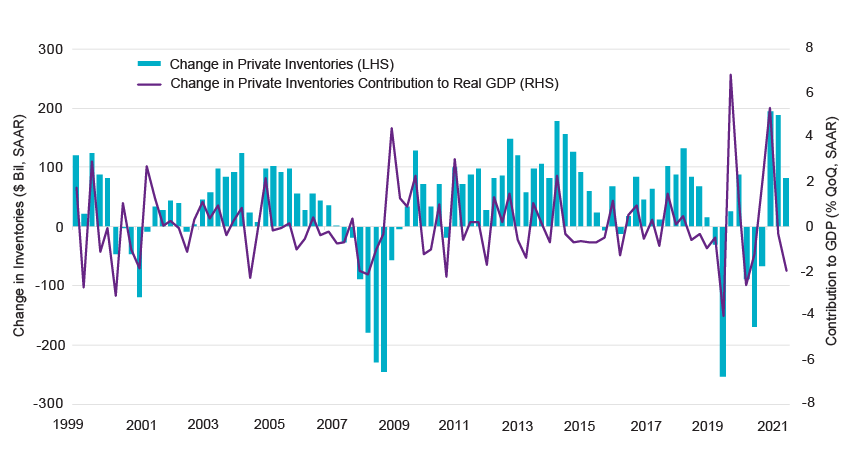 Putting the two components together, net exports and change in private inventories generated a cumulative drag on Q1 2022 GDP growth of nearly -3.6%. While the story for Q2 was a bit more mixed, the combination of these two line items shaved 0.6% off headline GDP growth for Q2, helping to tip the print into negative territory.

Why Isn’t This a Recession?
Despite the gloomy GDP data, a simple look under the hood continues to show a more robust US economy than the headline suggests. Final Sales to Domestic Purchasers strips out those volatile components, while Final Sales to Private Domestic Purchasers further strips out government expenditures to provide a cleaner look at underlying demand momentum. On both a real and nominal basis, these two measures of domestic demand in fact drifted higher from Q3 2021 to Q1 2022. While on a real basis these figures flatlined in Q2 2022, on a nominal basis they continue to suggest a robust nominal GDP growth environment (Figure 3). 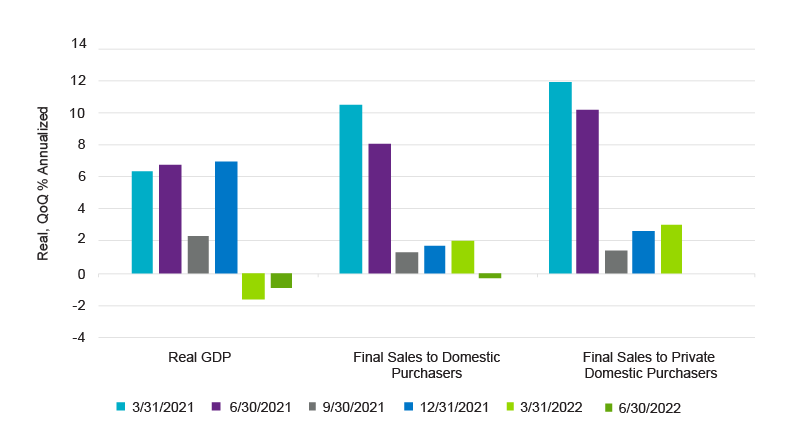 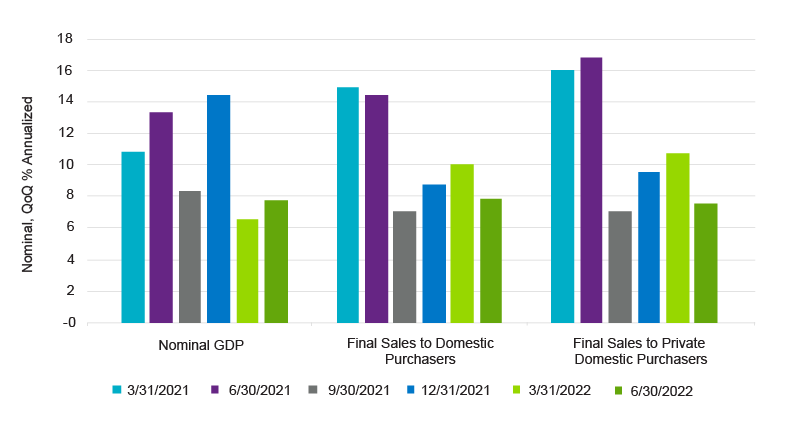 The US remains a consumption driven economy with consumer spending driving 70% of GDP. While some analysts point to dismal consumer confidence and claim consumers are losing purchasing power due to elevated inflation, the hard data suggests otherwise. Weekly credit card data shows consumption continues to power along at elevated levels (Figure 4).

And consumption seems unlikely to stall, as the economy has added 2.74 million jobs in 2022. That’s an average monthly rate of 456,000 jobs, and well ahead of the pre-Covid average of 191,000 jobs per month. Of course, all trends are subject to change but employment is one of the key metrics the NBER looks at to define recessions, and current data certainly doesn’t indicate that we are in a recession. 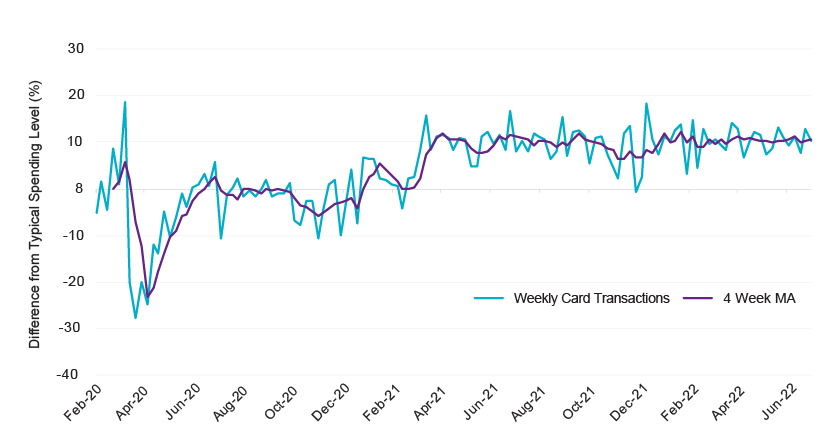 Finally, on the industrial side of the economy, there’s little evidence of recession. Yes, manufacturing and trade sales have moderated in real terms (after inflation), but, in nominal terms, they’ve continued to move higher. While the industrial sector may indeed moderate as inventories are worked off, industrial production continues to hold up at robust levels. And, as inventories in the auto sector remain 35% below trend, production is likely to remain well supported as those stocks are rebuilt.

What to make of the Q2 print?
While Q1 largely reflected the mechanical effects of GDP measurement and the continued rebalancing of the US and global economies in the wake of the pandemic, Q2 GDP did show some early signs of slowing growth. Fixed investment was a notable drag, as growth in non-residential investment, or capex, slowed to a halt as residential fixed investment contracted 14% as rapidly rising mortgage rates bit into the housing market. The result was a 2.7% drag on growth. And fiscal drag continued for the third consecutive quarter, shaving off an additional 33 basis points. Finally, while the bedrock of the economy, consumer spending, moderated from the prior quarter, growing only 1%, it continued to reflect the rebalancing of the economy, as goods consumption declined 4.4% while services consumption grew 4.1%. In short, there are indeed sings of tighter policy and continued normalization translating to slower growth, but it by no means confirms we are in a recession today.

What Would Indicate We’re Headed for a Recession?
The indicators that tell us we’re not in a recession are unsurprisingly the same ones to monitor for signs we’re headed in that direction:
To be sure there are risks, most notably stubbornly persistent inflation, which would force more aggressive rate hikes by the Federal Reserve. But for now, they remain just that: risks.

What Does This All Mean for Markets?
All of this discussion of a recession now is really a red herring. Markets are forward discounting, and the real question of recession is whether one is on the horizon in 6-12 months and, perhaps even more importantly, what that recession actually looks like. What’s priced in already is what really matters for markets and, even after the modest bounce off the mid-June lows, the stock market is still fully pricing in a mild recession and has done much of the heavy lifting for a routine average recession.

Outside of stock prices, there’s little compelling evidence that a recession is indeed imminent. Industrial metals are raising some red flags, but much of that is the result of the price spikes in the wake of the Russian invasion of Ukraine, and the subsequent unwinding of speculative inflation hedging flows. High yield bonds, typically the canary in the coal mine for fundamental economic damage, are hardly ringing alarm bells.

So, what might a recession look if one is indeed in our near future? We have little in the way of the pre-conditions for a deep and protracted recession with a significant earnings contraction:
A deep recession doesn’t seem to be on the horizon. But, a typical recession may not be either. Given the strength in the household and corporate sectors and inflation still running at elevated levels, we could actually see a mild recession where real GDP contracts but nominal GDP continues to grow. Why does that matter? Because corporates generate revenues and profits in nominal terms. Positive nominal growth might very well lead to a recession where corporate profits continue to grow, limiting damage in labor markets.

We’re likely in for some choppy markets until we get more clarity on the key overhangs of inflation and the Fed, and elevated rate volatility continues to ripple across assets and depress risk appetite. But, that skew continues to suggest we’ve already done a lot of the heavy lifting to price in an average recession that seems unlikely to materialize imminently, if at all. And, if it doesn’t materialize and that soft landing probability is higher than currently priced in, be prepared for a vicious bounce.

Once more for good measure: We’re not in a recession today.
This material is provided for informational purposes only and should not be construed as investment advice. The views and opinions contained herein reflect the subjective judgments and assumptions of the authors only and do not necessarily reflect the views of Natixis Investment Managers, or any of its affiliates. The views and opinions expressed are as of July 2022 and may change based on market and other conditions. There can be no assurance that developments will transpire as forecasted, and actual results may vary.

As correlations and inflation spiked in the first half of 2022, the best performing investment portfolios held inflation-protection assets, alternatives – and cash.

The pause in student loan payment requirements in March 2020 created a unique investment opportunity for borrowers who wanted to put their savings to work.