Skip to main content
Inflation surprises and recession fears have dominated the narrative lately, but the opportunity in corporate bonds is getting interesting. Investment grade corporate yields touched 5% in mid-June, their highest levels since 2009. Even after some retracement since then, yields in the mid-4% range represent a significant premium over the past several years.

But wouldn’t rising spreads sink corporate bonds, particularly considering our prospects for a recession? Data from the past four recessions provide some context. 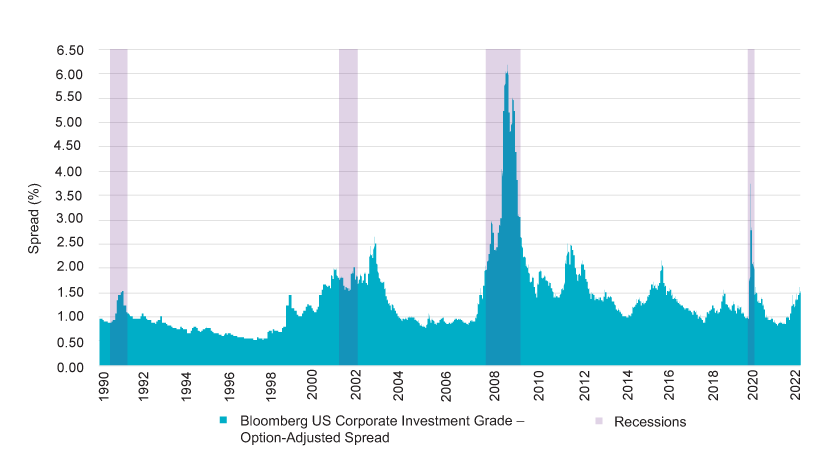 The four most recent US recessions include two milder recessions (July 1990 – Mar 1991; Mar 2001 – Nov 2001), one major recession (Dec 2007 – June 2009), and one major but short-lived recession (Feb 2020 – April 2020). All four are characterized by elevated spread levels. Three out of four are characterized by multi-year peaks in spreads that began to abate before the recession ended. Peak spreads – whether in the middle of a recession or not – are the ideal time to buy corporate bonds, as spread compression provides an additional kick to overall returns.

Credit Spreads as a Recession Signal
Since 1990, the non-recessionary average option-adjusted spread (OAS) is 117 basis points, while the recessionary average is 256 bps. Looking at those figures, the recent high-water mark of 160 bps OAS on 7/5/22 feels tame. But this average recession figure is biased upward by the extreme values experienced in the depths of the Great Financial Crisis. So another way to think about the signaling capabilities of spreads is shown in the “recession zones” in Figure 2. 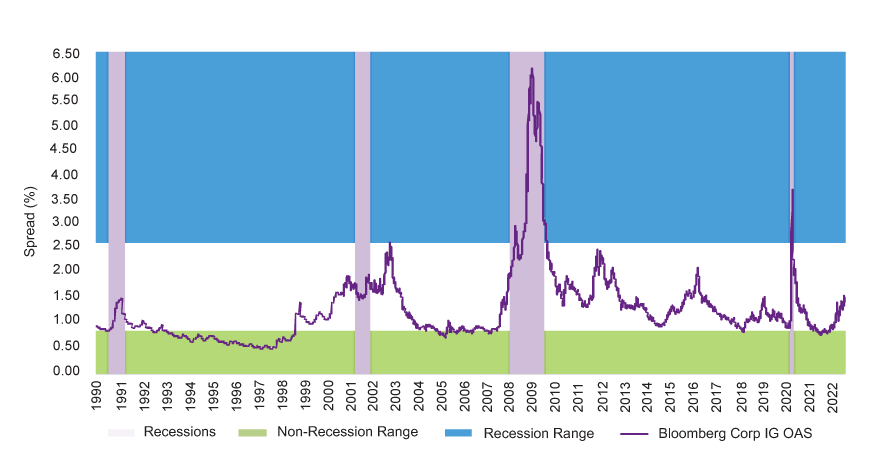 Since 1990, spreads of 88 bps and under have always occurred in non-recessionary periods, while spreads haven’t guaranteed a recession until 266 basis points. So we are solidly in the ambiguous zone in the middle.

Looking back at the two milder recessions, we have already surpassed the peak spreads of 1990–91, and are 40 bps shy of peak spreads experienced during 2001–02. In other words, corporate bonds are arguably priced as if we are in or close to a mild recession right now. And consider that despite the equity market losses, inverted yield curve, inflation surprises, you name it… there is a breadth of strong economic data making it incredibly unlikely that we are in a recession or that a recession is imminent: It’s also worth noting how close we are to peak spreads in a couple of non-recessionary periods. We’ve already touched or surpassed the late 1998 and early 2019 peaks, and we’re about 50 basis points shy of the 2016 peak. Granted, we are still about 100 bps shy of non-recessionary peaks in 2002 and 2011, although both environments more closely resemble credit selloffs like we’ve already endured this year, with a more elevated starting point.

Good Time for Investment Grade Corporates?
If your base case is that we’re in the early innings of a GFC-style recession, then by all means stay away from IG corporates. But if you think we’ve got some runway ahead before perhaps a milder recession (or if you think we’re already in a recession), then most of the pain has already occurred and the future prospects are attractive. We have the highest yields since 2009 and the potential for additional price appreciation if rate volatility subsides and/or corporate earnings prove more resilient than expected. As well as some cushion for downside protection, thanks to the elevated yields.

The perfect entry point is impossible to predict, and some investors may want to lean into corporate bonds over multiple steps as an additional risk management lever. But adding to corporate bonds, perhaps funded from Treasuries, mortgages, or cash, looks like a return-enhancing trade for many portfolios that sorely need one.

CFA® and Chartered Financial Analyst® are registered trademarks owned by the CFA Institute.
This material is provided for informational purposes only and should not be construed as investment advice. The views and opinions contained herein reflect the subjective judgments and assumptions of the authors only and do not necessarily reflect the views of Natixis Investment Managers, or any of its affiliates. The views and opinions are as of July 18, 2022 and may change based on market and other conditions. There can be no assurance that developments will transpire as forecasted, and actual results may vary.

Portfolio Manager Jack Janasiewicz explains why divergences in global monetary policy could be a key differentiator for asset class returns in 2023.

Learn how advisors have adjusted their financial portfolio allocations in response to higher inflation and difficult market conditions.