As we’ve moved through the COVID crisis, unemployment has risen to historic highs – but the stock market has bounced back toward its pre-crisis levels. The most common explanation for this seeming discrepancy is that “the economy is not the market.” But while this is easy to say, it can be hard to quantify and understand. We took a closer look at the numbers to provide some clarity and perspective, examining five key reasons for this difference:

Let’s take them one at a time.

Broad economic activity vs. total sales of publicly traded companies
The US economy, as measured by gross domestic product or GDP, differs from the US stock market because it reflects a much broader range of economic activity that includes personal consumption, business investment and government spending. It also captures the net of imported and exported goods and services. Approximately 70% of GDP is related to personal consumption. By contrast, the stock market reflects only the activity of public companies, and investors’ reactions to that information.

In addition, the economic activity measured by GDP captures sales from both public and private companies. This includes large private companies such as Cargill as well as small businesses like your local pizza shop. While there are about 4,000 publicly listed companies on US stock exchanges, there are more than 5 million employer-owned businesses of all sizes across the US.

For these reasons, contrasting government economic activity statistics with company sales and earnings is never going to be a perfect apples to apples comparison. First, we don’t have an accurate way to measure the exact total sales from private US companies. Second, economic activity reflects finished or final goods, so companies that sell component parts will reflect that activity as sales, while companies buying those components will count them as input costs. 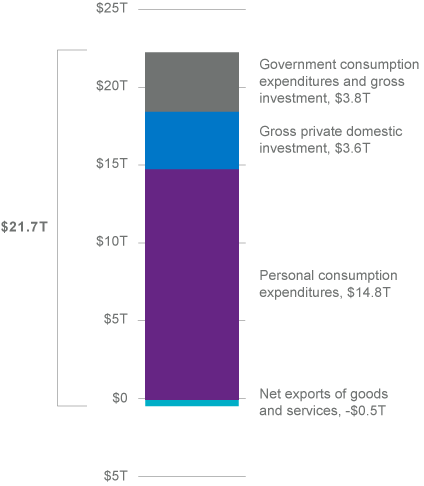 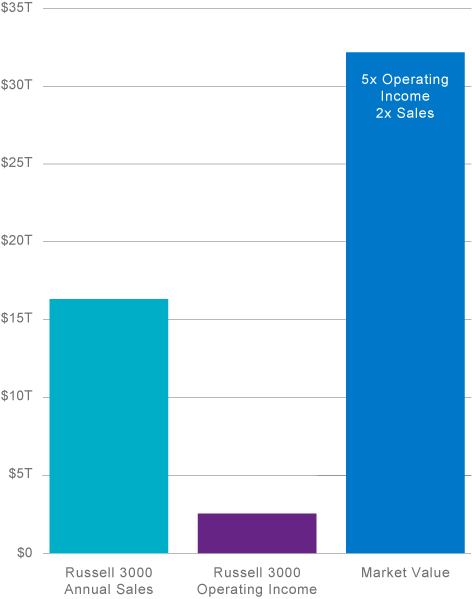 Source: BEA.gov, https://apps.bea.gov/iTable/iTable.cfm?reqid=19&step=2#reqid=19&step=2&isuri=1&1921=survey, FactSet 12/31/19
The economy is domestic, but the stock market is global
Using the Russell 3000® Index as a proxy for the total US stock market, we know that annual revenue amounts to about $16 trillion. However, roughly $6 trillion of that total comes from revenue outside the US, some of which would be captured as exports. Think of airplanes made by Boeing and sold to another country – or US companies that operate in a range of other countries. For example, sales of Starbucks coffee in China count as revenue for the US company, but that economic activity is not reflected in US GDP. And while 37% of the revenue in the Russell 3000® Index comes from outside the US, that percentage is even higher for large-cap US companies.

Figure 2 – US equity market annual revenue is close to $16 trillion – but about $6 trillion comes from non-US revenue
US Stock Market: Annual Sales: Only 63% from US (Russell 3000® Index) 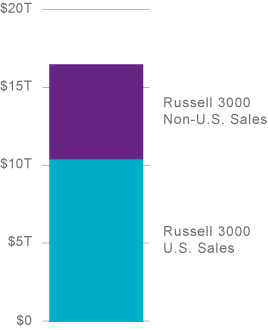 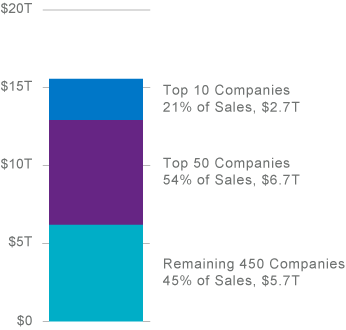 It is also valuable to consider that the top three sectors in the S&P 500® Index are technology, healthcare and communication service – sectors which are arguably less impacted by the current new normal and in fact may be benefiting from it. These top three represent just over 50% of the market value of the S&P 500® or about $13.5 trillion, which is nearly half the total market value of all public companies. So in the current crisis, the divergence between the economy and the market may be even more exaggerated.

Another dimension to consider is the survivorship bias that is reflected in these market cap weighted indices. Specifically, the most successful businesses from a sales and profitability standpoint grow larger and therefore more dominant over time. In addition, investors tend to value these companies more favorably, making them increasingly larger components of these indices over time.

Employment perspective: Who works where?
Prior to the impact from COVID-19, there were about 160 million people employed in the US, including 21 million government workers, mostly at the state level. If you exclude about 10 million self-employed agricultural employees, that leaves about 129 million people working at companies, both private and publicly traded. Using the companies in the Russell 3000® as a proxy, we see that there are about 41 million employees at publicly traded US firms.

Figure 4 – Less than 25% of US employees work for a company in the Russell 3000®
US Employment Total vs. Employed by companies that trade in the Stock Market 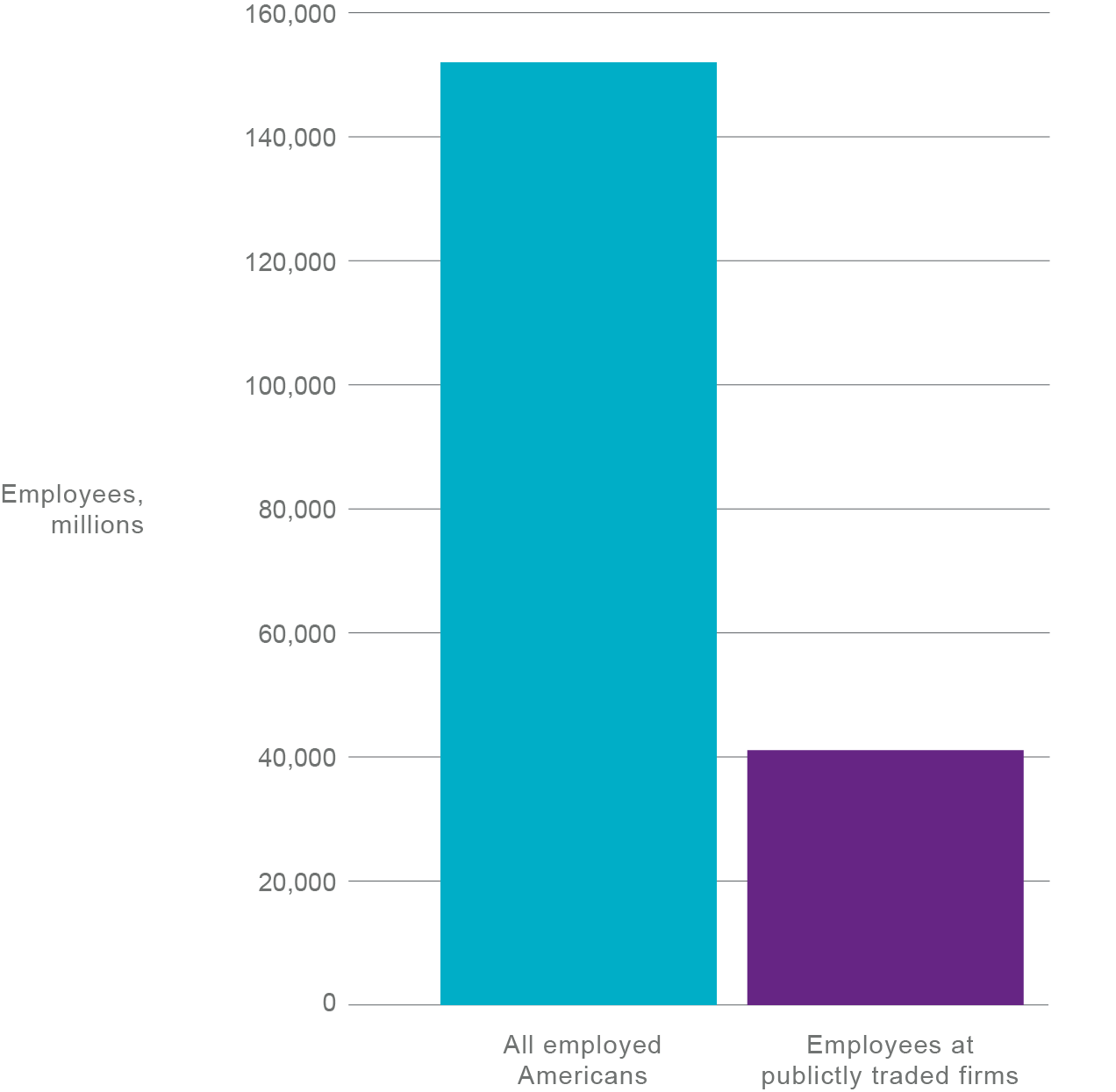 But even this data point isn’t straightforward, because many of these American companies employ people outside the US. For example, Walmart is the largest US employer with 2.2 million workers, but only two-thirds of them work in the United States. Going back to the point about heavy at the top, the largest 50 companies in the S&P 500® Index employ 11.7 million people, but they are global companies that generate revenue and employ significant workforces in other countries. So again, the diversified economy that employs about 160 million people is very different from the stock market of publicly traded companies that employs less than 25% of American workers.

Varying time frames: Economic data is now, while market value reflects the future
And finally, time frames matter. GDP represents this year’s economic activity, while the current market value of a company is derived from the sum of its future cash flows and income. This is why the market value of publicly listed companies is about 2x their annual revenue and 13x annual operating income. Based on this measure, the total market value of all public companies exceeds the total annual GDP by a significant margin.

This disconnect only increases when we consider that private companies – where there is no published value, nor any public trading to reflect their business value – are excluded from this comparison. Because the time frames don’t match, there will always be discrepancies between the current economic environment and how investors value company income over the next 3–5 years. So while you may hear in the press that the largest technology companies have market values that are larger than many countries’ GDP, the market is not the economy. And vice versa.

Indexes are not investments, do not incur fees and expenses and are not professionally managed. It is not possible to invest directly in an index.

All investing involves risk, including the risk of loss. Investment risk exists with equity, fixed income and alternative investments. There is no assurance that any investment will meet its performance objectives or that losses will be avoided.

The views and opinions expressed may change based on market and other conditions. This material is provided for informational purposes only and should not be construed as investment advice. There can be no assurance that developments will transpire as forecasted. Actual results may vary.

GDP per capita is a measure of the total output of a country that takes the gross domestic product (GDP) and divides it by the number of people in the country. This measure is often considered an indicator of a country's standard of living.

S&P 500® Index is a widely recognized measure of US stock market performance. It is an unmanaged index of 500 common stocks chosen for market size, liquidity, and industry group representation, among other factors. It also measures the performance of the large-cap segment of the US equities market.

Russell 3000® Index measures the performance of the largest 3000 US companies representing approximately 98% of the investable US equity market. The Russell 3000® Index is constructed to provide a comprehensive, unbiased, and stable barometer of the broad market and is completely reconstituted annually to ensure new and growing equities are reflected.

PM Mike Tian of WCM Investment Management discusses how some businesses are adapting to a changed business environment as a result of Covid-19.