On Monday March 9, oil prices dropped over 30% – the most in a day since the 1991 Gulf War – after Saudi Arabia launched a price war with Russia by stepping up production and cutting prices when Russia refused to align with OPEC and cut production further. Given already weaker demand amid a slowdown in global growth and the COVID-19 outbreak, the supply surge in an already oversupplied market suggests a price-bearish combination not seen since the 1930s. 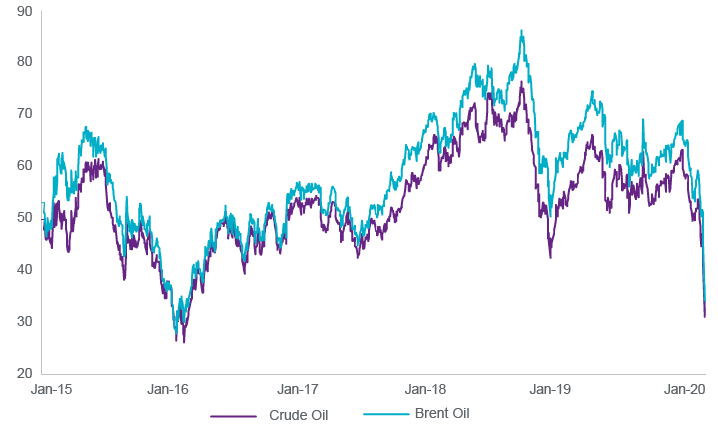 The Good
Typically, lower oil is seen as a positive for global growth. While the US is now the world’s largest oil producer and has become a net oil exporter in recent years, the amount of domestic oil consumption remains high and lower prices will be a benefit for household consumption. Indeed, lower oil prices are the equivalent of a tax cut for consumers, as Americans drive a lot. And of course, this should help some of the industries most impacted by the virus outbreak, such as airlines, shipping, and manufacturing.

In addition, many large economies are energy importers, including in the European Union. In emerging markets, lower oil is a positive for China, India, Turkey and South Africa among others. With China the largest consumer of oil, lower prices will be a boon in the current environment. 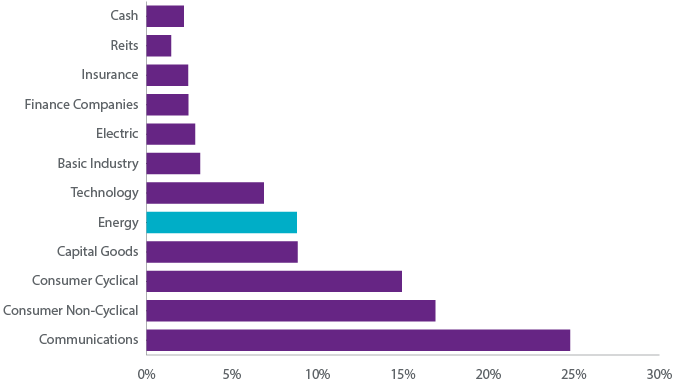 The Bad
So why are lower prices bad news this time? First, on top of the coronavirus outbreak, this is a second shock that markets do not need. Credit markets have started to show cracks in the recent selloff, as growth fears challenged low default rate expectations, but the 12% of energy in the US high yield space (down to 9% following recent performance) is now leading to fears of a wave of defaults.

Going into 2020, US shale producers were already facing hurdles, cash flow issues and maturing debt. Oil companies had already announced they would slash capital expenditures and cut back on new rigs. But if oil price were to remain low, bankruptcies could be the next step, tightening financial conditions and reducing liquidity.

From an economic perspective, the US oil and gas industry contributes 8% of US GDP and over 10 million jobs: Depressed oil prices for a prolonged period could lead to layoffs. The average breakeven price for US shale production has fallen $2 per barrel over the past years, to USD50 per barrel. However, this average masks some important differences between areas and operators, from about $25 a barrel for some operators to $90 a barrel for some countries.

Once jobs – and therefore US growth – become at risk, the US administration is not likely to sit back. In 1986, President Bush asked Riyadh for higher oil prices as he was concerned about the impact of the oil price slump on the economy. President Trump could make a similar attempt, especially as Texas, North Dakota, and South Dakota are key election states.

Outside the US, Norway is among a group of oil exporters, which stand to lose in a prolonged price war. While many of the largest emerging market economies are oil importers, Russia and Brazil stand out as oil exporters. From a market perspective, while many emerging markets benefit from lower oil prices, the headlines tend to encompass all countries in the negative bucket, as we saw in 2015, and EM assets as a whole tend to suffer.

The Ugly
Can this get ugly? Yes. Saudi and Russia both have the ability to keep this game of chicken going for some time, and the longer it lasts, the bigger the collateral damage. That said, hurting US shale producers is a fringe benefit – and might be Russia’s ultimate objective – so collateral damage is a loose term.

The ugly could be a wave of defaults, with credit markets seizing up and leading to additional credit events. It could also be low oil prices, coupled with already weak demand and weak growth, leading to deflation fears. Interest rates could fall further as markets are already pricing US interest rates at 0, as well as further cuts elsewhere, suggesting that banks could continue to suffer. This is one of the reasons why small-caps in the US are getting hit, as they include both shale producers and smaller banks. And European banks might not prove immune, as low rates in the US suggests even lower rates – for longer – on the Old Continent.

Elsewhere, Saudi has more spare capacity to produce, but if oil stays around USD35, the Kingdom would run a nearly 15% deficit in 2020 (without any adjustment). Other countries that would suffer serious budget hits with already precarious situations include Iran, Venezuela and Nigeria, where breakeven prices are above USD80 per barrel.

A Surge in Output? 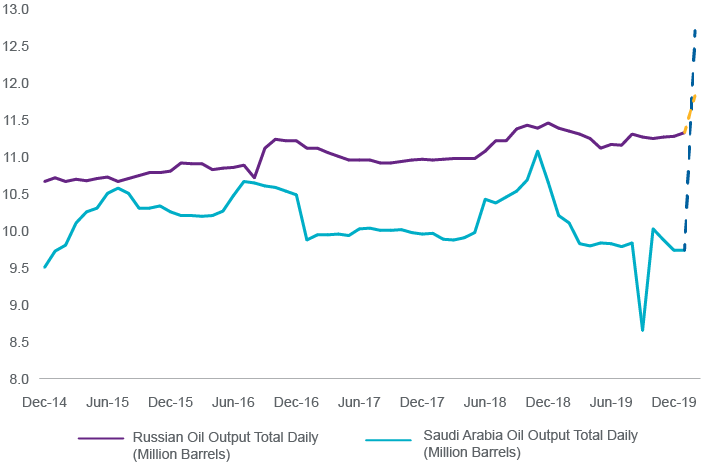 What’s Next?
Mostly, the impact will depend on how long prices remain depressed. We do not believe that Russia will retreat quickly, as it has both the will and the ability to inflict pain on other producers. As such, we will carefully continue to monitor the credit space for any signs of more systemic risks, of deteriorating liquidity and of ripple effects on other segments beyond high yield.
This material is provided for informational purposes only and should not be construed as investment advice. The views and opinions expressed may change based on market and other conditions.

Diversification is important, but the depth of research and strong convictions behind more concentrated portfolios can benefit investors.

Macro analysts Esty Dwek and Jack Janasiewicz look at how investors can be thinking about the global economy as Covid-19 inoculations get under way.