Since the end of January, headlines have been focused on the spread of the coronavirus out of Wuhan, in China. Here, we will focus on the potential economic impact that we are likely to see in global economic data and how we are positioning our portfolios. We base the following views on the assumption that most estimates are correct and that the virus should be contained in the coming weeks.

The actual impact on global growth will take time to be fully measured, and no one knows exactly how big it will be. The current economic impact of the outbreak is due to the stringent containment measures, so how long it takes until the coronavirus is “under control” (that is, until we see the peak in the rate of new cases) will be key to determining how large the impact ends up being.

China at a standstill
Chinese growth is expected to fall by about 2% during the first quarter, with a recovery in the following quarters. However, not all can be recovered as travel and shopping related to Chinese New Year will not be replaced entirely. That said, most of the trade and manufacturing-related activity should rebound. Indeed, Chinese activity typically dips during the first quarter, in large part because of the New Year closures, before picking up during the rest of the year. As such, 2020 estimates have fallen, though not that sharply for the year as a whole. We expect growth to decelerate to around 5.5%, but again, this will depend on the duration of the quarantines.

China’s service sector activity has continued to grow in recent years and now represents more than 50% of GDP growth. Travel and tourism are 11% of GDP, which will be severely hit during Q1. In order to encourage the recovery in growth once the outbreak is contained, we expect Chinese policymakers to announce further measures. They have announced the halving of tariffs on USD75 billion of US goods starting on Friday in order to limit the impact of higher prices on consumers – and possibly to appease the US since they are unlikely to reach the spending targets set in the “phase one” trade agreement.

Ripple effects
China represents an ever-growing share of global GDP (17% in 2019) and is much more interconnected than during the SARS outbreak in 2003. 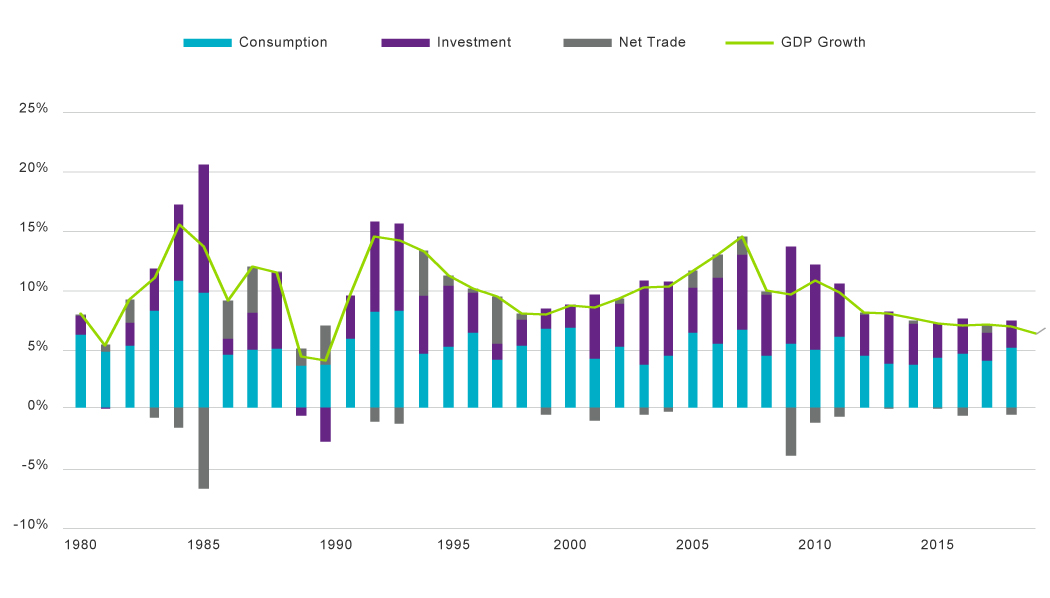 Chinese travel and tourism have stopped and this stoppage is likely to impact regional economies the most, including Hong Kong and Thailand, where tourism represents a high share of growth. However, Chinese tourism represents ~25% of global travel & tourism GDP growth, suggesting other regions will suffer as well.

In addition, the nearly 100 international companies based in Wuhan are remaining closed, creating supply chain disruptions for automakers, healthcare, and technology. Component shortages due to halted shipping are likely to impact global production. For example, the US imports ~USD138 billion of intermediate goods from China – about 15% of total imported intermediate goods and about 5% of total imports.

Other manufacturing-oriented economies such as Japan, South Korea and Germany will also see an impact from lower import demand from China. Europe is at risk of a marked slowdown in Q1 as well, depending on Chinese demand for its exports (as seen in the last few years with China’s structural slowdown) and Chinese tourist consumption, in no small part for luxury companies. Indeed, Chinese buyers represent about 30% of French luxury goods sales. As such, we believe that European growth will be weaker than anticipated for 2020 as a whole. 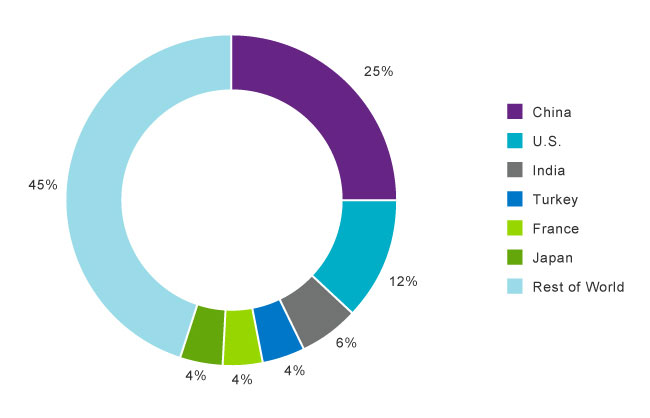 The US, on the other hand, should remain relatively insulated as the economy is much more domestically oriented and much more dependent on its own consumer, even if Chinese tourists represent 14% of US tourism income. Indeed, with lower oil prices and lower interest rates, US consumers should continue to demonstrate resilience, and with them, US growth. We therefore expect growth to remain around 2% for the year, though Q1 numbers are still likely to see some distortions.

While we believe that most of the impact will be felt during the first quarter, with a subsequent recovery into the end of 2020, we are keeping an eye on trade. Given the long US-China trade war, global trade was just regaining some momentum following the “phase one” deal that was reached in December 2019. Will the outbreak cause only a temporary pause, or will it stall the much-needed recent upswing in trade momentum?

In addition, supply chains are likely to continue to be diversified, becoming less reliant on China, but this is a multi-year trend.

Commodity demand
Slower global growth, trade and manufacturing expectations have already impacted commodity prices, and countries that depend heavily on their materials’ exports, such as Chile with copper and Australia with iron ore. The sharp fall in travel (air, rail, and vehicle) has led to a ~20% drop in oil demand from China, and probably some reduction elsewhere on canceled flights as well. Indeed, Wuhan is a major transportation hub in China that has seen travel entirely stopped.

OPEC+ could try to cut production again to stabilize prices. In the US, current prices are also low for shale producer, suggesting the online rig count is likely to decrease, which should eventually bring some underlying support to prices. For now, we believe prices will find a floor but take time to recover, until there is more confidence the coronavirus is contained and global growth will overcome the obstacle. Conversely, gold and other precious metals have benefited from the rise in safe haven demand, a trend which should continue in the short term.

Unconditional support
Central banks are likely to yet again show their unconditional support to growth and extending the current cycle. The People’s Bank of China (PBoC) has already injected liquidity and cut the 7-day and 14-day rates, but we believe that more cuts will come. In addition, we believe that Chinese policymakers will continue with their targeted stimulus measures, and possibly ramp up efforts to support a rebound in activity for the coming quarters, including higher credit growth.

The Federal Reserve (Fed) has already stated it is likely to remain on hold for some time. And now, given the outbreak, markets are even leaning towards a rate cut later in the year. We do not believe this will be necessary – unless contagion is much worse than expected – but we also believe that we remain even further from fears of rate hikes. Indeed, inflation expectations have retreated again, giving ammunition to the Fed to remain accommodative for the foreseeable future.

Portfolio positioning
Equity markets have proven resilient so far, as we have witnessed corrections but not a serious sell-off. The Chinese market has suffered the most, with regional Asian markets next, then Europe and finally the US. We believe that markets will recover once the outbreak is contained, and while we have reduced our allocation slightly in anticipation of higher short-term volatility, we maintain our overweight to equities for the medium term, seeing these corrections as opportunities to “buy the dip.”

We believe that European assets can benefit from the rebound when it occurs, as sovereign yields should resume their upward drift, and we maintain our overweight for now. Over the longer term, we continue to believe that the US market will outperform thanks to higher growth and earnings. Emerging markets are likely to play catch-up, with growth recovering and lots of rate cuts and cheaper valuations.

We believe that yields will take time to resume a move upward and that yields will remain lower than anticipated a few months ago. Nonetheless, we believe we are near the lows now, and we maintain our underweight position and our preference for credit. We continue to see opportunities in hard currency emerging market corporate debt and high yield.
This material is provided for informational purposes only and should not be construed as investment advice. The views and opinions expressed may change based on market and other conditions.

In a difficult year, financial advisors favored US growth stocks and high quality bonds in their model portfolios – but missed out on some top performing asset classes.

Global Market Strategist Esty Dwek outlines her Top 10 potential risks – and questions to consider – for the year ahead.

With growth opportunities harder to find in the pandemic economy, investors may want to consider the potential advantages of the mid-cap space.