Unprecedented times call for unprecedented measures. Facing a global health crisis that has morphed into a global economic crisis, central banks and governments around the world have announced massive stimulus measures in an attempt to avoid a full-blown financial crisis. This “money-pumping” is expected to lead to inflation, or even hyperinflation, but should we really be worried about this?

Avoiding Depression and Deflation
In the first instance, policymakers have decided it is more important to avoid an economic and financial disaster than it is to worry about potential future consequences. Indeed, with the global economy at a complete standstill, second round negative effects could be quick to materialize and swift action was required. Moreover, the market meltdown in itself was cause for concern and some confidence needed to be restored.

What about inflation? Central bankers would like inflation, and have been trying to boost inflation for years. And if they didn’t succeed with 3.5% unemployment in the US, it is unlikely to materialize with 15% unemployment. In such a context, we are unlikely to see spending sprees or credit growth.

When looking at the components of inflation measures, many of the more expensive items are unlikely to see a sharp rise in demand in the short term. Looking at the Personal Consumption Expenditures (PCE)1 breakdown – the Federal Reserve’s (Fed) preferred measure – hotels, restaurants, transportation, automobiles and furniture are not likely to be the first items consumers spend on, especially given employment and income concerns.

In addition, inflation has faced structural headwinds in recent years, such as aging populations, technology, and the “Amazon effect” as the price of everyday products has continued to fall.

What About All This Stimulus?
Following previous rounds of fiscal and monetary stimulus during the Global Financial Crisis (GFC), and especially with quantitative easing (QE)2 announcements, inflation fears had been touted as well. It didn’t happen then and we do not think it will happen now. That is because QE drives up banks’ excess reserves, but it does not guarantee they get deployed. If there is no appetite for these reserves, the velocity of money does not rise, which means inflation does not rise either.

Yes, the magnitude of the Fed’s balance sheet expansion today is much larger than even in 2008, but it does not matter if there is no velocity of money. Indeed, “M2”3 – a reference to the global monetary supply that includes savings deposits, money markets, and mutual funds – is rising rapidly, and the Fed’s balance sheet is likely to surpass USD10 trillion, but the velocity of M2 is actually slowing.

The same applies to fiscal stimulus. The numbers might be staggering, but the reality of the CARES Act is that it is income replacement, not additional spending. As such, it is unlikely to be inflationary, it is just avoiding a further fall in consumer spending as a result of stay-at-home orders and job losses. 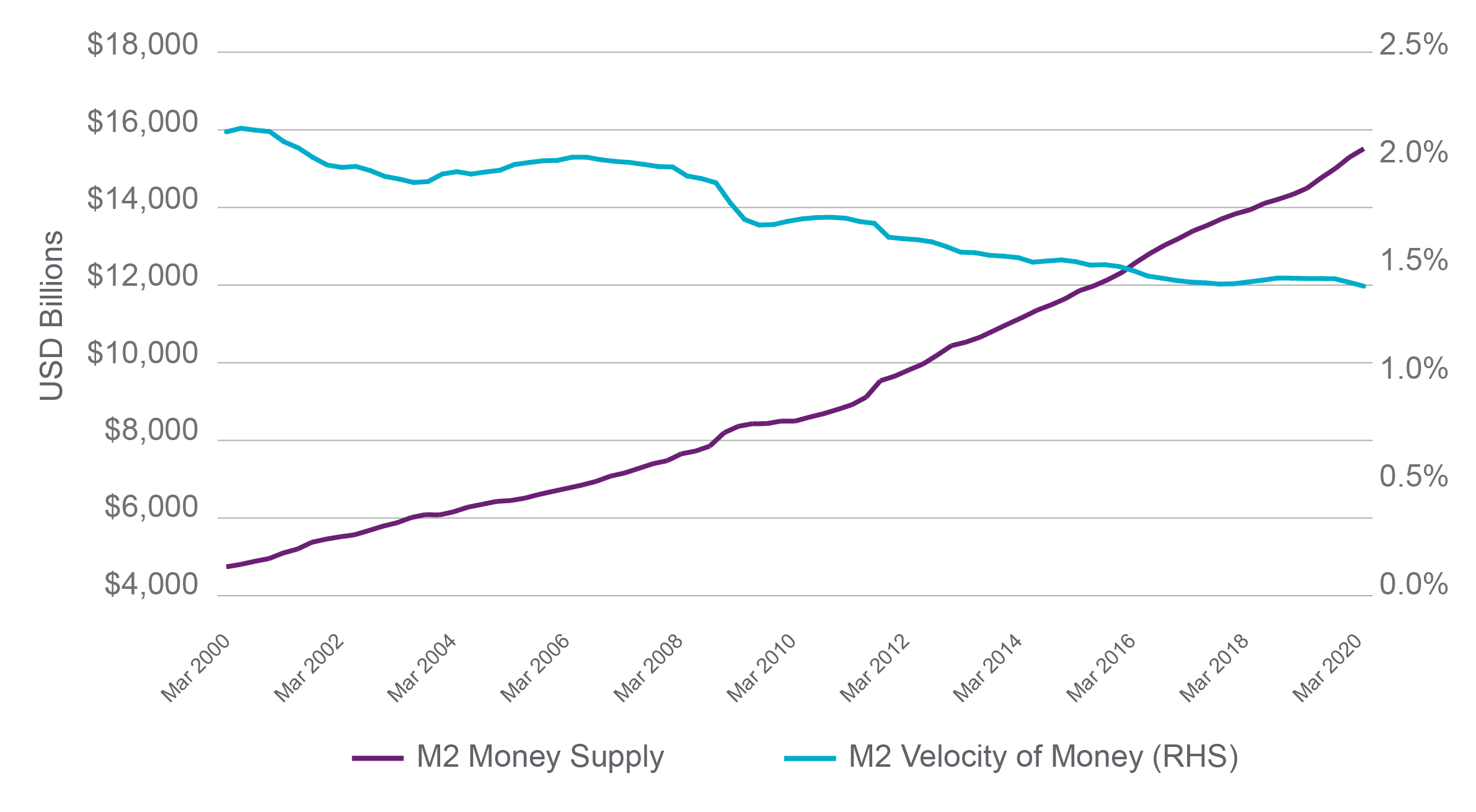 The one caveat is if stimulus arrives too late and life is already “back to normal.” In this case, the pent-up demand could meet supply constraints that lead to higher prices – but this is not our base case. And even if it does occur, it will likely be temporary as production ramps up again. We also believe that consumption behaviors will see some impact in the short term. The post-confinement reaction is likely to be cautious, especially as labor markets will have suffered significantly, and many businesses may have gone bankrupt.

And Modern Monetary Theory (MMT)4? Whether it admits it or not, the Fed is practicing MMT. That is, the government is spending as much as needed, with the Treasury issuing the debt and the Fed buying it. And the main criticism of MMT is that it generates inflation as you inject liquidity on a permanent basis. But here again, all this spending is not new money, it is replacement money and as such should not prove inflationary as long as the Fed reins in its emergency programs in a timely manner.

De-globalization
Over the longer term, this pandemic could prove inflationary, but not from monetary stimulus or a sudden rise in money velocity.

One of the consequences of the crisis could be a move towards de-globalization. Given the impact on supply chains from border closures and containment measures, many countries are likely to want to move production back onshore, or at least regionally. This is particularly the case for “nationally strategic” sectors such as healthcare and defense. Production costs and wages would go up, and increased costs would likely be passed through to consumers. But this phenomenon, if we see it, would take years and will therefore not be a concern for some time.

Markets Run Ahead
As mentioned above, central banks would like to see some inflation. Indeed, inflation isn’t bad, and it would help erode away some of the mountains of debt that will result from crisis measures. The concern with inflation is that it will force central banks to tighten monetary policy – raise rates and stop balance sheet expansion. Given current (too low) inflation expectations and interest rates at zero, this transition could prove painful for markets. 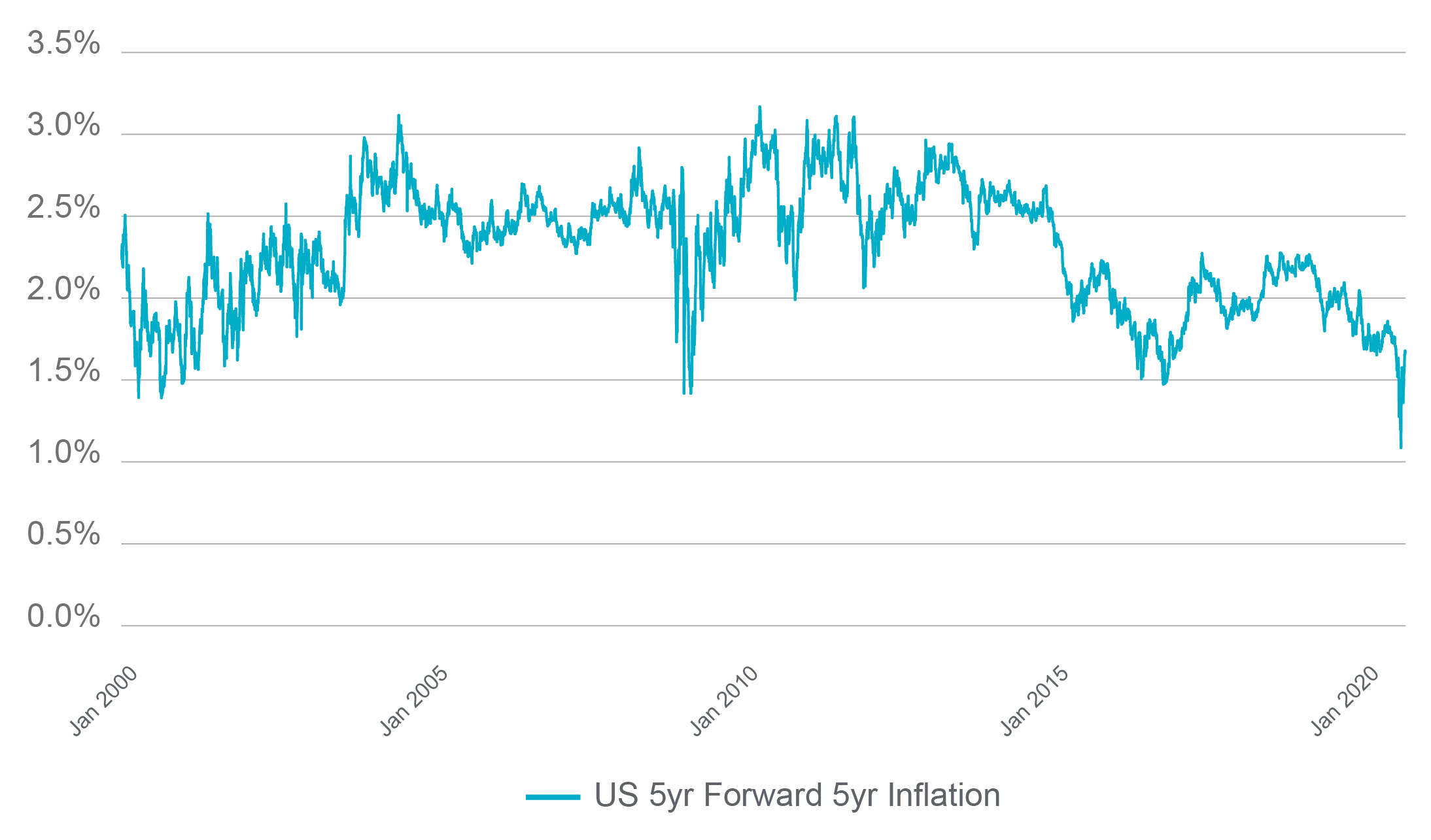 We’ve seen in previous instances that investors do not like quantitative tightening, suggesting a tricky balancing act: Will central banks manage to message this as normalization to pre-COVID levels and not as “growth-impacting rate hikes”? Moreover, markets typically front-run economic data, so we could see inflation fears come to the fore even if we are unlikely to see actual inflation materialize for a long time.

Portfolio Positioning
For now, we see little risk of inflation and we are not positioning for it. We will keep an eye on inflation expectations as markets could start to price in Fed moves, but we do not expect this to be a 2020 concern. As such, we are not reducing fixed income allocations. Indeed, with yields set to remain low for longer, we believe the search for yield will continue for some time. Nonetheless, holding some inflation-linked bonds and gold makes sense.
1 The Personal Consumption Expenditure (PCE) measure is the component statistic for consumption in gross domestic product collected by the United States Bureau of Economic Analysis.

2 Quantitative easing refers to monetary policy in which a central bank purchases government securities or other securities from the market in order to lower interest rates and increase the money supply.

3 The term “M2” refers to a calculation of the global money supply that includes cash and checking deposits in addition to savings deposits, money market securities, mutual funds, and other time deposits.

4 Modern Monetary Theory (MMT) stipulates that monetarily sovereign countries like the United States, United Kingdom, Japan and Canada are not operationally constrained by revenues when it comes to federal government spending and therefore do not need taxes or borrowing for spending since they can print as much as they need and are the monopoly issuers of the currency.

When considering ETFs, know how premium/discount is calculated — and look at other factors

For PM Bill Nygren of Harris Associates, finding value in the post-pandemic world equates to a focus on trend acceleration worldwide.

To help make the most of emerging market opportunities for its clients, WCM Investment Management uses an active, long-term investment approach focused on companies with improving competitive advantages and superior corporate cultures.