The rise in geopolitical tensions in the Middle East has brought oil prices back into the headlines. The deterioration in relations between the US, Europe, and Iran has led to growing incidents in the Gulf, bringing some underlying support to oil prices.

Indeed, in an attempt to pressure Europe into telling the US to remove the sanctions it put back in place after pulling out of the Geneva nuclear accord, Iran has been misbehaving. For now, Iran has stopped short of any human casualties. The same has been true of the US, which cancelled planned military strikes at the 11th hour in retaliation for the downing of its drone by Iran. As long as the dispute remains confined to isolated incidents without casualties, we do not expect a military escalation. 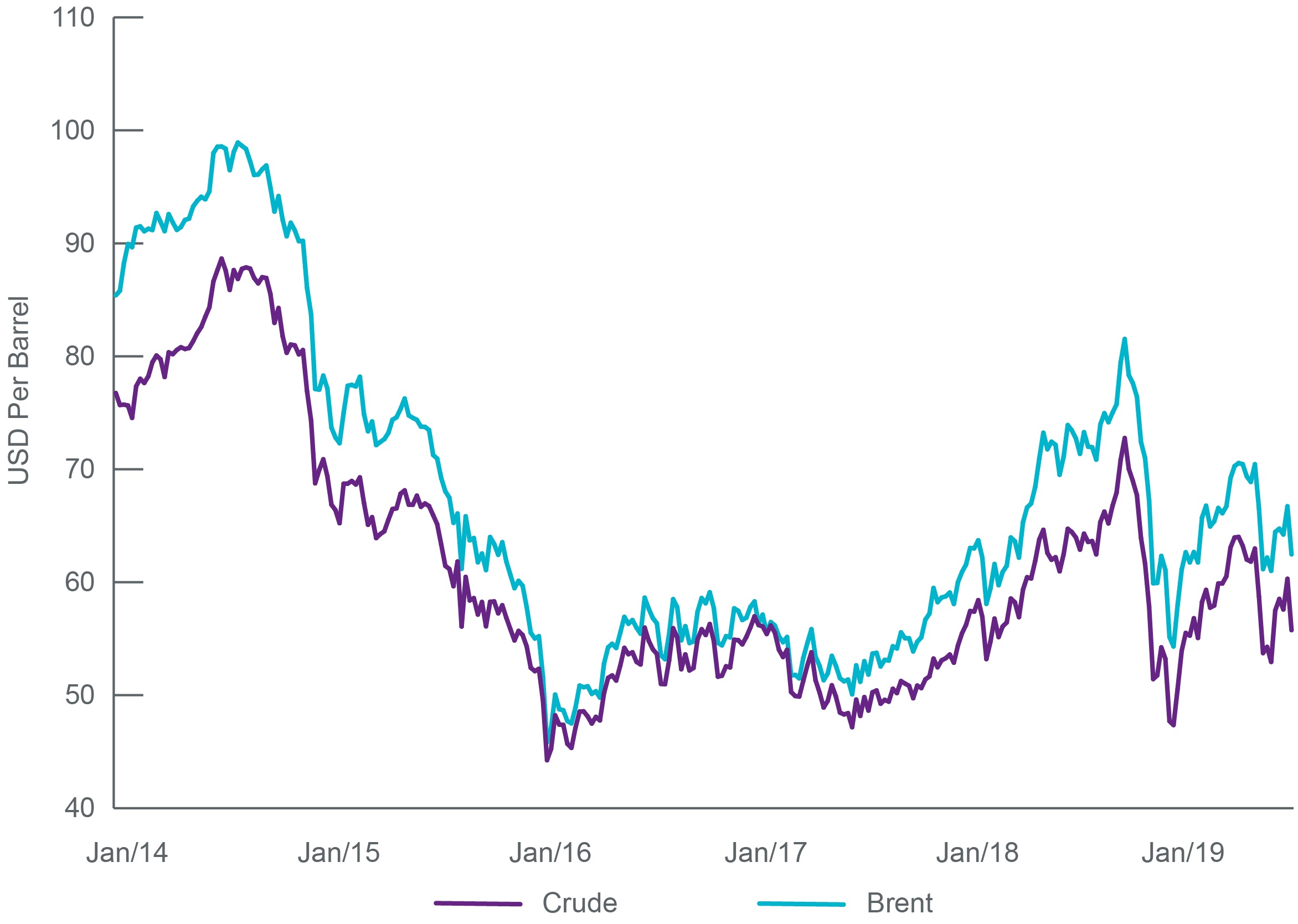 The Strait of Hormuz, which forms a chokepoint between the Persian Gulf and the Gulf of Oman, represents the world’s most important energy waterway. Indeed, about a third of the world’s liquified natural gas and more than 20% of total global oil consumption (~21 million barrels per day), passes through the Strait. As such, any escalation in tensions could lead to severe supply disruptions, leading to a spike in prices. Although Iran has struggled to close the Strait in the past, fear of disruption is not negligible. This would nonetheless require a significant escalation.

OPEC no longer dominates pricing
In an effort to underpin prices amid growth concerns, OPEC+ – the expanded Organization of Petroleum Exporting Countries (OPEC), which includes Russia – has agreed to production cuts, currently extended to March 2020, to attempt to balance supply and demand. OPEC consists of the world’s major oil producers and about 37% of global oil production. Adding Russian production, they represent more than 50% of global oil production. As such, OPEC has historically managed the supply side to set prices around the USD70 per barrel they deemed appropriate. The production cuts have helped maintain oil prices in a context of decelerating global growth, though probably not to the extent OPEC+ would have liked – or been able to achieve in the past. Indeed, while OPEC was the ultimate decider of prices for many years, the rise of shale production has changed this. 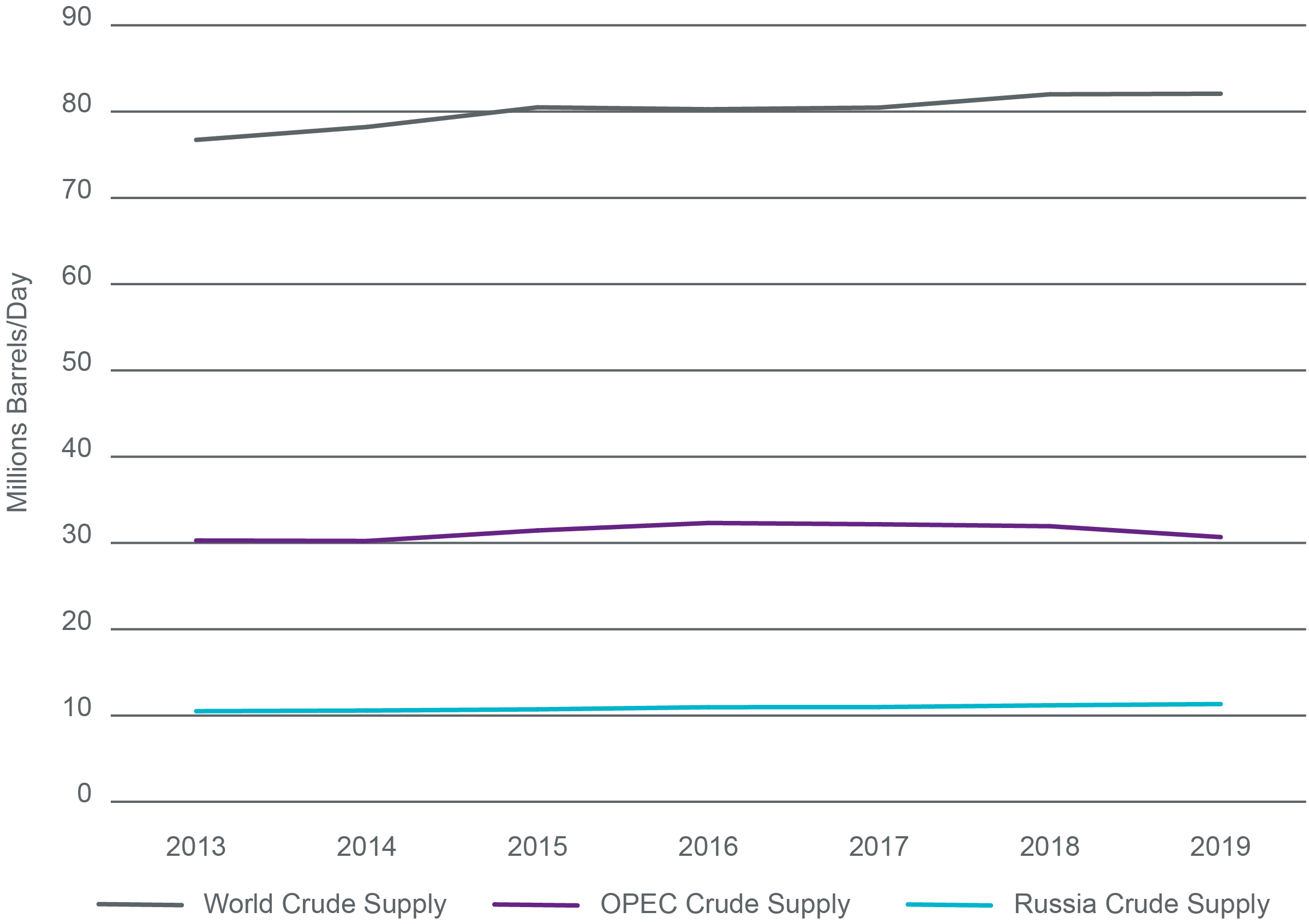 Shale, the game-changer
The arrival of shale oil production has revolutionized the energy industry. The fracking process, a technique designed to recover gas and oil from shale rock, has boosted the US and others’ ability to produce their own oil. Indeed, the US currently produces as much oil as Saudi Arabia or Russia. This technique has been used broadly, where possible, in an effort to become less dependent on Middle East oil. Shale oil can be produced at lower extraction costs than traditional oil, though the breakeven price can vary greatly.

In a competition for market share and to challenge shale producers that have higher breakeven costs, Saudi Arabia has been happy to continue to produce near maximum levels, even at lower-than-breakeven prices. At the same time, shale producers need the revenues and have continued to produce at maximum capacity. This implies that supply has been ample, especially as demand has softened.

By 2021, the US is set to become a net oil exporter, which means the world’s largest economy will no longer be energy dependent on the Middle East. The US will account for 70% of the increase in global production capacity by 2024, adding a total of 4 million barrels per day. With Brazilian production rising as well, non-OPEC production is set to rise in the coming year, while OPEC production is expected to fall slightly.

Recession fears
Oil prices are intrinsically tied to global growth, and recent worries about the growth slowdown have outweighed rising geopolitical tensions with Iran. The impact of trade wars cannot be ignored, as there is a direct link with energy demand. Oil demand is expected to grow only mildly in 2019, and again at a similar pace in 2020, meaning that demand growth is not increasing, but staying stagnant in a decelerating world. In addition, most of the increase in demand has come from China in recent years, which now consumes 13% of global oil production. Slowing manufacturing and trade uncertainty, however, could weigh even further on demand. At the same time, supply levels continue to grow and Saudi Arabia has made up for the decreased production due to US sanctions on Iran. Moreover, inventory levels across the Organization for Economic Cooperation and Development (OECD) have continued to grow, reducing pressure on prices as stocks are ample. 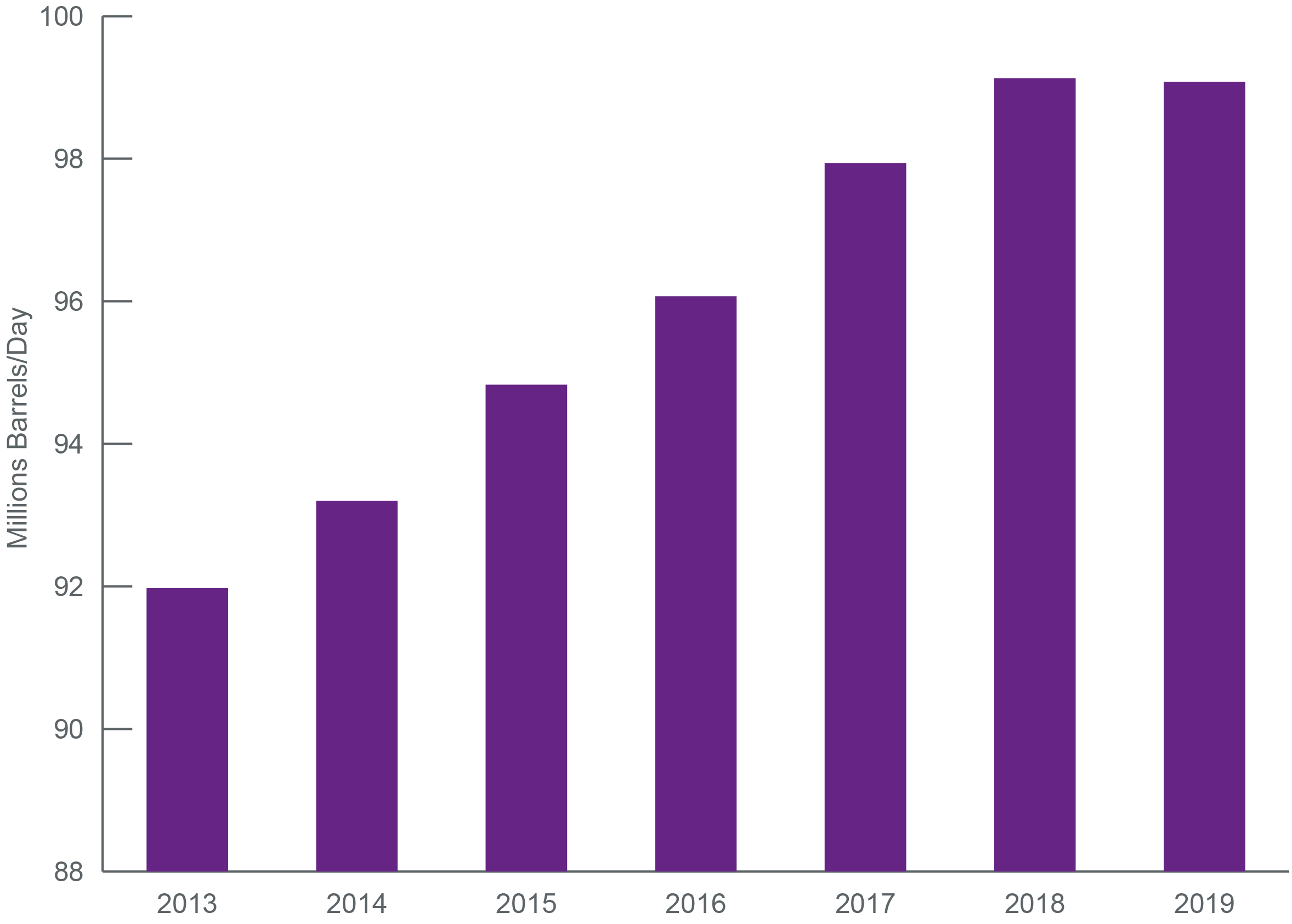 Overall, oil prices are likely to range-trade in the coming months, as these counterbalancing headlines pull and tug at prices.

Changing dynamics
Over the medium term, demand from the emerging markets as well as the changing structure of oil demand, is likely to determine price action. We are moving away from industrial and transportation uses to more consumer needs, such as petrochemicals (aka plastic), despite environmental concerns. As such, petrochemical demand is set to account for 30% of global oil demand growth.

Indeed, China and India are expected to account for 44% of the expected growth in oil demand by 2024. The rest of Asia remains the largest source of demand, as economies catch up with the developed world. But demand from the developed world is likely to continue to fall. Whether these demands balance out will determine prices, but with growing supply from shale, prices shouldn’t skyrocket.

Conclusion
For now, the tug-of-war between geopolitical tensions and growth concerns is being won by recession fears, and capping prices despite worries about Iran. Nonetheless, we cannot exclude slightly higher prices in the short term, despite ample supply. Over the medium term, however, we believe that changing demand dynamics-and especially growing supply from non-OPEC and shale producers-is likely to act as a cap on prices.
Commodity-related investments, including derivatives, may be affected by a number of factors including commodity prices, world events, import controls, and economic conditions, and therefore may involve substantial risk of loss.

This material is provided for informational purposes only and should not be construed as investment advice. The views and opinions expressed are as of July 31, 2019 and may change based on market and other conditions. There can be no assurance that developments will transpire as forecasted, and actual results may vary.

Macro backdrop in light of COVID-19, taking advantage of dislocations in EM debt markets, and new opportunities in FinTech are examined by PMs on Loomis Sayles Global Allocation Team.

Results from the 2019 Global Survey of Professional Fund Buyers predicted increased equity volatility and illustrates how professionals have been positioning portfolios for riskier market scenarios.

What a crisis event is and how trend-following strategies began searching for crisis alpha as the virus spread is examined by AlphaSimplex’s Chief Research Strategist.

How COVID-19 is impacting various areas of the municipal bond market is examined by by Loomis, Sayles & Company’s Municpal Credit Research Team.