As of late June, it has become clear that certain sectors of the US economy – particularly retail, hospitality, and entertainment – will incur significant damages as a result of the COVID-19 pandemic. Many lives will be adversely affected by the loss of activity in these sectors, and the near and long-term challenges faced by these business should not be understated. Nevertheless, it is important to remember that these sectors represent approximately 7% of total US GDP. Elsewhere, there are signs that the economy has moved beyond crisis point and into a nascent recovery. This is particularly true in less labor-intensive sectors and those less affected by social distancing measures – sectors like financial services, manufacturing, government, and health services – which make up a greater combined share of total gross output in the US.

Second Wave Considerations
Concerns about a second wave of contagion remain widespread as states move deeper into the reopening phase. A significant subsequent wave of COVID-19 cases continues to be widely referenced as a potential catalyst for a second leg lower in equities. However, as the four points below suggest, we believe it is possible that markets have already priced in many of the risk dynamics related to a second wave.

Positioned to Move Ahead
The effort made by healthcare workers to stem the tide of cases in early 2020 has proven vital, and its importance cannot be stressed enough. The suggestion that the US requires vast improvements in testing and contract tracing has been widely discussed. While this approach has been successful in South Korea, it appears less and less likely that the US will be able to successfully implement such a system in a timely fashion. Moreover, the country’s deeply held traditions of civil liberty make the prospect of implementing more intrusive contact tracing initiatives, as well as continued or expanded state-mandated containment measures, politically daunting.

The health risks related to COVID-19 are real – continued adherence to social distancing measures, handwashing protocols, and the use of masks are crucial components of containing further spread of the virus. However, we believe markets have priced in a second wave of cases and begun to account for the ability of the healthcare system to contend with it. Of note here is that in some states hospitals are starting to implement road maps for bringing elective procedures back on line.

Slow and Steady
The economic reopening remains slow and measured. Restrictions remain in place and in most places will only be lifted with extreme caution in the attempt to slow the spread of a second wave. While no one is expecting 100% across-the-board participation in containment measures like handwashing and face masks, awareness about the dangers of the disease and how it spreads has become “the new normal.”

It also remains likely that the hardest hit areas of the country will be better at self-policing for COVID-19 than areas that were spared the worst of the initial outbreak. While these areas may disregard containment measures in the early stages of outbreak, it’s also possible that the local threat of the virus will elicit more adherence and help to limit the size of any new outbreaks. In addition, there is evidence that the virus may have been in the US earlier than initially thought. As a result, it’s possible that the number of people who have been infected by the virus is higher than we know, including asymptomatic cases or cases presenting only minor symptoms. This is not to discount the serious health risks associated with COVID-19 – this is not just “the flu” – it only means that important work on how the disease spreads and manifests continues.

Maintaining Risk Mindfulness
While the situation remains fluid, we believe as of early summer that unless we see things turn more dire – including an increase in COVID-19’s lethality or evidence of a renewed strain on healthcare systems – a measured nationwide reopening will continue through the end of the year. The experiences of early 2020 have the potential to help address and contain a significant second wave of cases, allowing for a gradual reopening and the establishment of a new way of life. The stock market is not the economy. Large index players appear to be virtually unaffected by COVID-19, and they are likely large enough to play a role in holding up the broader market. More importantly, strength has rotated from exclusively these large tech firms and other beneficiaries of the new normal economy to include more cyclical sensitive sectors, an important signal that the recovery in asset prices is indeed sustainable. While we believe we will see business failures, we do not believe they will occur on a scale that significantly threatens the long-term survival of the US economy. In addition, the number of the COVID-19 business closures could be contained in part by merger and acquisition activity in a world where distressed managers are looking to sell. In the meantime, risks that we are watching include:

Keeping Up the COVID-19 Fight
Plenty of unknowns remain, as do a multitude of risks. COVID-19 has drastically changed life as we know it. Still, much work has been done to answer the call, and this work continues. Regardless of whether or not you take a bull or bear perspective on the remainder of 2020, our guess is you’re doing so with a bit more humility and gratitude. 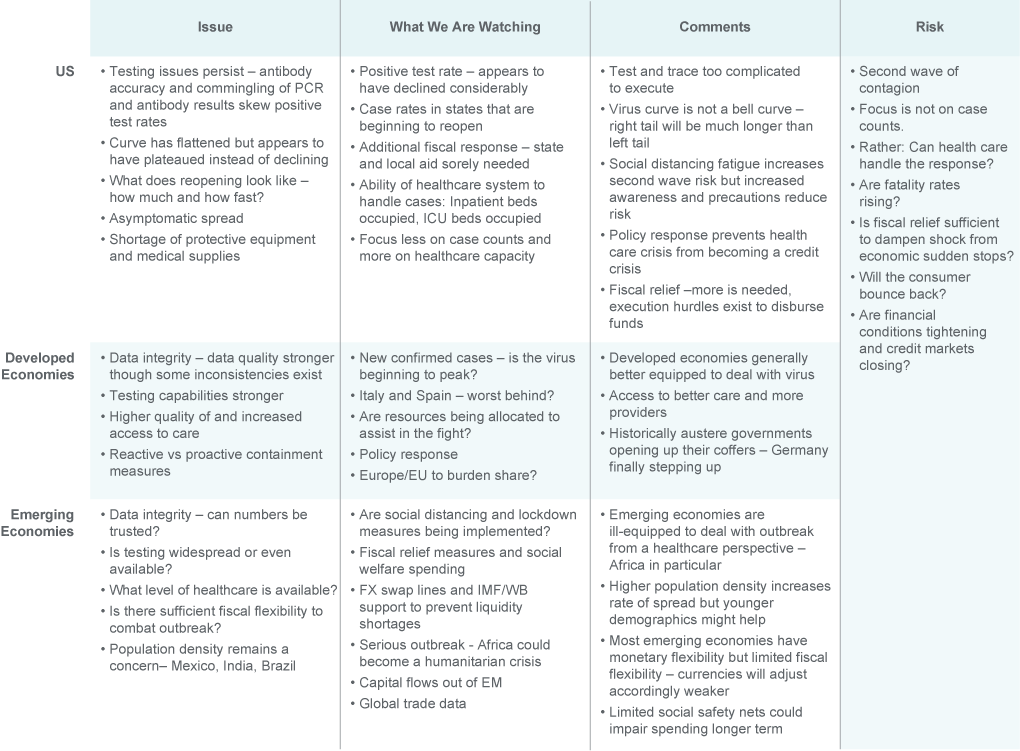 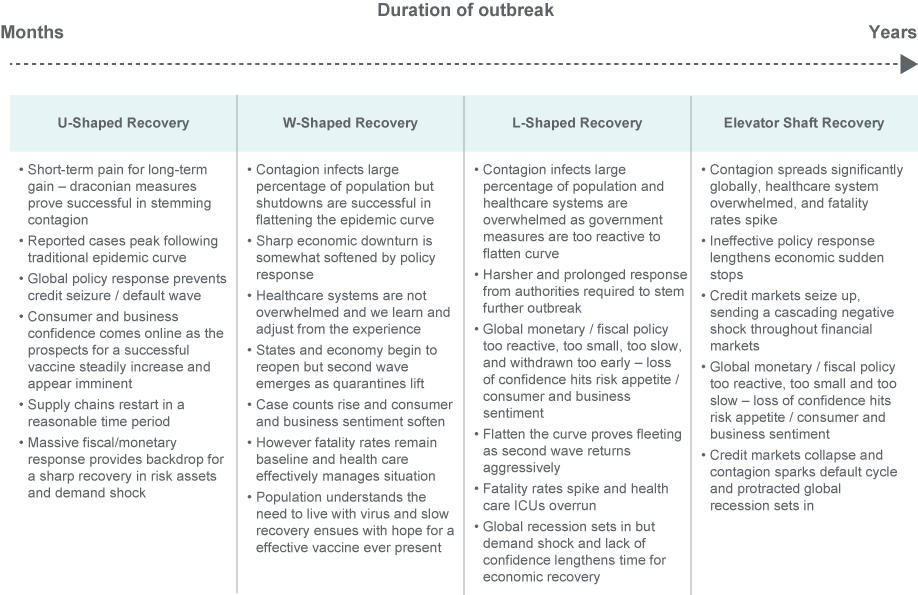 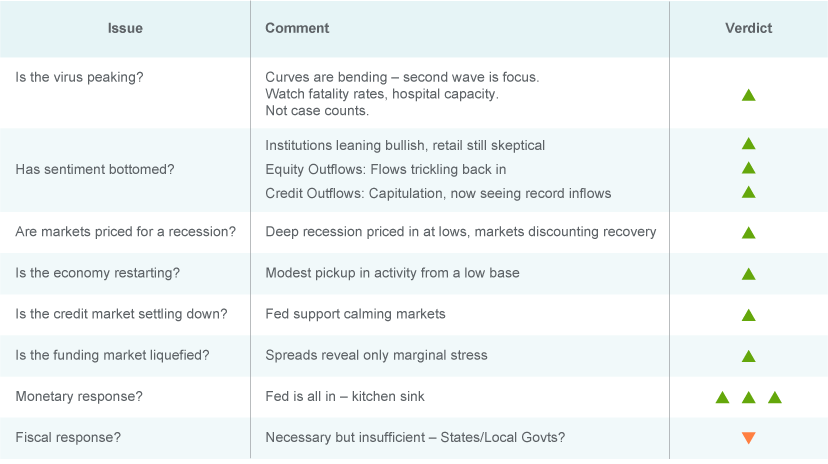 2 An exchange-traded fund, or ETF, is a marketable security that tracks an index, commodity, bonds, or a basket of assets like an index fund. ETFs trade like common stock on a stock exchange and experience price fluctuations throughout the day as they are bought and sold.

3 Equity Long-Only or Long-Only equities is a type of investment strategy that utilizes only long positions in the assets it owns, with “long” referring to the expectation that the asset (stock, commodity, or currency) will rise in value over time. This approach is used by many hedge funds.

The views and opinions expressed may change based on market and other conditions. This material is intended for informational purposes only, does not constitute investment advice and should not be construed as a recommendation for investment action.

A look at the major components of the candidate’s tax policy proposals and their potential implications for markets and portfolios.