On the surface, Fed Chairman Jerome Powell’s remarks at the June Federal Open Market Committee (FOMC)1 meeting appear to be a hawkish surprise. But if you look closer, perhaps it’s not as hawkish as it might seem. Here are some of our thoughts and analysis on the dot plot shock, taper talk, and market reactions.

So what just happened?
Consensus coalesced around a narrative expecting a hawkish surprise at the June Federal Open Market Committee meeting – with much of that call focused on updates to the Summary of Economic Projections (SEP) and in particular the 2023 median dot.

While the statement offered no surprises, the SEP and dot plot certainly did. 2021 growth and inflation measures were revised upward. However, that was largely a mark to market after the strong growth and inflation prints we’ve seen this year. Forecasts beyond 2021 were largely unchanged, as were unemployment rate projections.

The big shock came from the dot plot.2 While consensus expected the median dot to reflect one hike in 2023, the surprise came as the 2023 dot shifted up 50 basis points. 13 out of 18 officials now see at least one hike in 2023, and 11 of those members see two hikes for 2023. The 2022 median dot remained unchanged, but it also saw three more officials forecast one rate hike for 2022, bringing the total to seven members.

What else happened?
There were some mechanical tweaks too, with the IOER (interest rate on excess reserves)3 and RRP (reverse repurchase program)4 rates both nudging up 5 basis points. We view this as a technical adjustment and not a monetary policy tool. Any calls to the contrary should be ignored, in our opinion.

What made us go hmmm?
We note that some of these shifts are somewhat of a headscratcher. Changes in the dots do seem to deviate from the company line Jerome Powell has pushed forward. For months Powell has stressed that the checklist is nowhere near complete for rate hikes to commence and will likely take quite some time, but for some these moves brought that timeline into question.

The new framework emphasizes maximum employment over inflation. But the lack of material changes in unemployment, paired with increases to inflation expectations, suggests that the nature of the dot changes is largely driven by inflation concerns. During the FOMC press conference, Powell stressed that inflationary pressures in recent months are likely transitory, though he acknowledged that some forces could prove to be more persistent. Perhaps this is the driver behind the larger than expected shift in 2023 dots?

Powell also mentioned, repeatedly, during his press conference that the Fed expects a robust labor market in the years ahead – while also acknowledging that demographic trends and increasing retirements could result in a lower post-crisis labor force participation rate. On the other hand, he also stated that labor market supply could be larger and longer lasting than expected, as was the case over the course of the last cycle.

What does that mean?
We continue to believe that the names behind the dots matter. Listen to the FOMC governors and voting members. We think their voices matter. Regional presidents not so much. We don’t know exactly who is who, but we can certainly guess, and a rough estimate below suggests the governors and voting members likely constitute the dots that remain largely unchanged.

The other takeaway from the dots, especially the 2023 dots, is the wide dispersion. The dots moved up, as did dispersion. Uncertainty remains high and that’s reflected in the spread. These are simply estimates. Nothing more, nothing less. 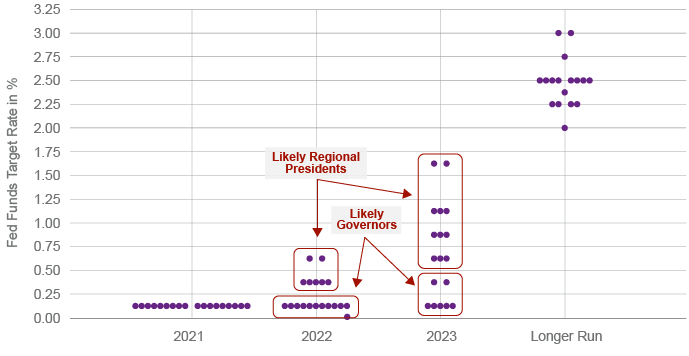 Source: Federal Reserve, June 16, 2021
*Assumptions of likely votes by regional presidents and governors in red were added by the authors.

Is FAIT dead?
We don’t believe FAIT (Flexible Average Inflation Targeting, part of the Fed’s new monetary framework)5 is going away. We are seeing a lot of calls for the demise of FAIT and from some surprising places. But we’re not falling for it. Of course, there are still some regional presidents that have yet to accept FAIT, and we believe that played a role in the dot plot moves.

But overall, there’s really one reason we believe the dots moved higher: Downside risks have moderated and that skews the forecasts higher. Market participants, we believe, are now more comfortable that Fed objectives will be met sooner than previously thought. This chart below really says it all. Amidst that backdrop, inflation uncertainty is higher and is now skewed to the upside. 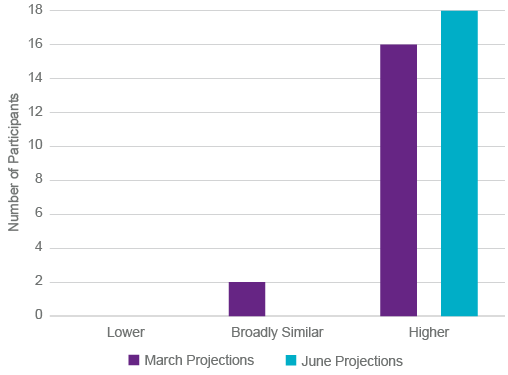 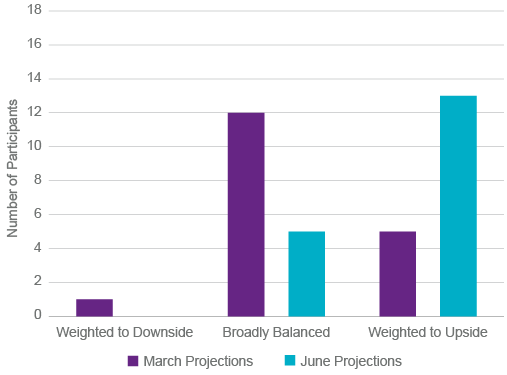 Wait, no taper?
Chairman Powell’s opening statement made it clear that the FOMC is now talking about tapering. This was the “talking about talking about meeting” and Powell suggested it’s now time to retire that term. But this is simply the beginning of a long conversation that marks a very slow pivot towards beginning that taper. While Powell pushed back against the idea that the Fed is now calendar dependent on the taper timeline, they still largely are. It will happen when it happens, but that time likely isn’t until 2022.

So what about the markets?
Markets love to overreact. We saw some pretty stunning market moves right around the time of Powell’s press conference and thereafter. Nominal yields moved aggressively higher, with the moves most pronounced in the intermediate tenors, particularly the 5-year, which rose almost 12 basis points (bps). Even more eye-watering was the move in real yields7 – with the 5-year real yield spiking 22 bps as break-evens embraced the transitory inflation narrative. Action further out the curve8 was far more muted, with the 30-year widening about 3 bps and driving considerable flattening in the curve.9

The US dollar predictably rallied on the hawkish tilt and backup in yields. And equities, with the exception of financials, plummeted. As usual, however, the first move is usually the wrong one. Equities rallied substantially off the lows, though still closing in the red, and banks hung onto a green close. We will be watching closely for follow-through on these moves.

For all of the day’s drama, essentially all we got was a mark to market of a better growth outlook. The reaction function remains intact and still relies on actual and not anticipated data. Is that really bad for equities and fixed income markets that are already heavily bearish rates? We’d argue no.
1 The Federal Open Market Committee, a committee within the Federal Reserve System, is charged under United States law with overseeing the nation's open market operations. This Federal Reserve committee makes key decisions about interest rates and the growth of the United States money supply.

2 The Federal Reserve uses a dot plot to signal its expectations of future interest rate changes. In a Fed dot plot, each member of the FOMC is represented by a single dot, but each dot is anonymous.

3 The Federal Reserve implements Interest on Excess Reserves (IOER) to adjust the banks’ holding of excess reserves and influence the monetary supply. Excess reserves refer to the cash and deposits held by a financial institution (e.g., a commercial bank) exceeding the reserve requirement that an authority (e.g., the central bank) sets. Excess reserves protect the banking system by providing additional liquidity buffers.

4 The US Federal Reserve Bank utilizes reverse repurchase agreements (RRP) to maintain long-term monetary policy and ensure capital liquidity levels in the market. These investment instruments include collateralized loans, buy/sell back loans and sell/buy back loans.

5 Flexible Average Inflation Targeting (FAIT) framework seeks to achieve inflation that averages 2% over time and will allow inflation to overshoot after a period of undershooting, more firmly anchoring inflation at the 2% objective.

6 Personal consumption expenditures (PCEs) measure consumer spending for a period of time. The PCE Price Index is the method preferred by the Federal Reserve to measure inflation. Of all the measures of consumer price inflation, the PCEPI includes the broadest set of goods and services.

7 Real yield is the nominal yield of a bond minus the rate of inflation.

8 Yield curve is a line that plots yields (interest rates) of bonds having equal credit quality but differing maturity dates.

This material is provided for informational purposes only and should not be construed as investment advice. The views and opinions expressed are as of June 17, 2021 and may change based on market and other conditions. There can be no assurance that developments will transpire as forecasted.

All investing involves risk, including the risk of loss. Investment risk exists with equity, fixed income, and alternative investments. There is no assurance that any investment will meet its performance objectives or that losses will be avoided. Past performance is no guarantee of future results.

This document may contain references to copyrights, indexes and trademarks that may not be registered in all jurisdictions. Third party registrations are the property of their respective owners and are not affiliated with Natixis Investment Managers or any of its related or affiliated companies (collectively “Natixis”). Such third party owners do not sponsor, endorse or participate in the provision of any Natixis services, funds or other financial products.

Experts in the Natixis Investment Managers family say the biggest risk facing investors in the second half of 2021 may be no risk at all.

Fed moves, volatility, and real yields in the second half are analyzed by Loomis, Sayles & Co. Full Discretion Co-Head and a Senior Sovereign Analyst.

Inflation and other factors in a post-pandemic world are discussed by a Loomis, Sayles & Company Core Plus Bond PM and Senior Macro Strategies Analyst.

Analysis of recent data indicates that a growing percentage of investors are willing to pay a premium for protection against large equity market moves.