With ultra-accommodative monetary policy, trillions in quantitative easing (QE)1 programs and trillions more in fiscal stimulus measures, there is so much money “out there” that it must eventually lead to inflation, right? Admittedly, the risks are skewed to the upside, particularly since the Democrats won both Georgia Senate runoff races to give President Biden the razor-thin majority he needs to get his fiscal packages through Congress. That said, I still do not expect an inflation scare this year, even if inflation is bound to rise, and I certainly do not expect the US Federal Reserve (Fed) to “blink” and rein in supportive policies much sooner than anticipated.

Why Does Inflation Matter?
With all the headlines and debate about the future path of inflation, one might forget why the end result matters so much. Ultimately, it is about the Fed and about financing costs for businesses (or bond yields). If we start to see sustained high inflation, bond yields will surge, and the Fed will need to step in and withdraw accommodative monetary policies. The Fed has indicated that interest rates will remain at zero until 2023 and QE will remain in place until “substantial progress has been made on maximum-employment and average inflation goals.” If inflation rises too quickly, the Fed will need to backtrack on its guidance and raise interest rates sooner. As such, there is some fear of a spike in yields, another taper tantrum, and a sharp selloff in equities.

Indeed, equity markets tend to do well with moderately rising inflation. However, yield spikes or unexpected Fed tightening have not been supportive for risk assets. Of course, the most at-risk segment is the bond market, with extremely low starting yields and the perception that these can only go in one direction – up. In my view, as long as the rise is gradual, equity markets can continue to do well. However, unruly moves would certainly hurt investor sentiment.

One could debate inflation globally, but US inflation is more likely to move higher and the Fed is the biggest mover of markets, since so many assets are priced off US Treasuries. Moreover, in Europe, disinflation remains a bigger concern, despite the jump in January inflation measures, and the question for the European Central Bank (ECB) is more about additional support than withdrawing extraordinary measures.

Upside Risks
While I believe that most of the global fiscal measures are acting as income replacement and the still-low velocity of money suggests inflation is not about to pick up meaningfully, the possibility cannot be excluded. Indeed, the Fed “wants” to be behind the curve with its new average inflation targeting mechanism, so inflation is set to be higher in the coming years, as the Fed allows it to rise further before acting.

Inflation expectations have steadily risen since the vaccine rollout began, with an added boost in January from the Democrats’ surprise majority in the Senate. With trillions more expected in fiscal spending and an economy that is already recovering, overheating could happen. Indeed, the economic disruption has been concentrated to certain sectors, which could see a rapid rebound once vaccines are more broadly distributed. In addition, wage growth hasn’t fallen outside of these affected sectors, so a tightening labor market could lead to wage pressures.

Inflation Expectations Have Moved Up 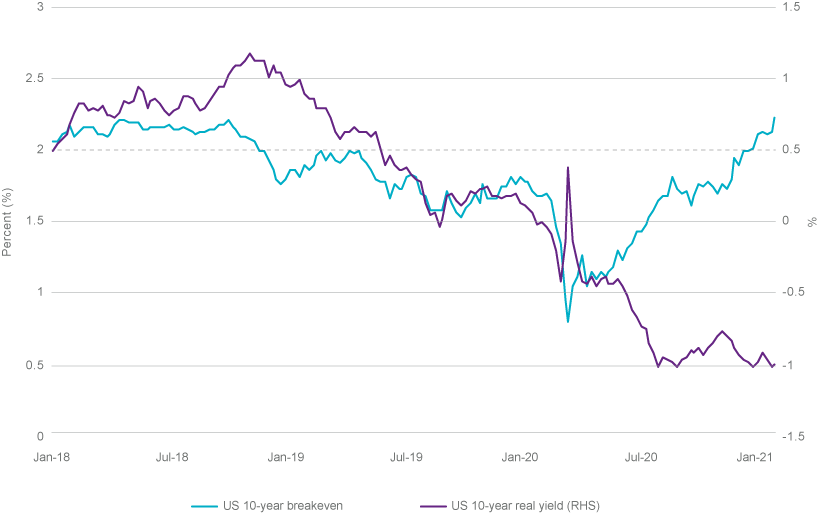 Pre-pandemic, services inflation was relatively sticky around 3%; it was the disinflationary trend on the goods side that kept the overall Consumer Price Index (CPI)2 figure in check. However, with supply chain disruptions, rising transportation costs, and higher commodity prices, goods inflation could climb. Indeed, we have already seen a rise in the prices paid by manufacturers. The question is whether these will combine with higher services prices for higher headline CPI.

Goods Inflation Could Pick Up 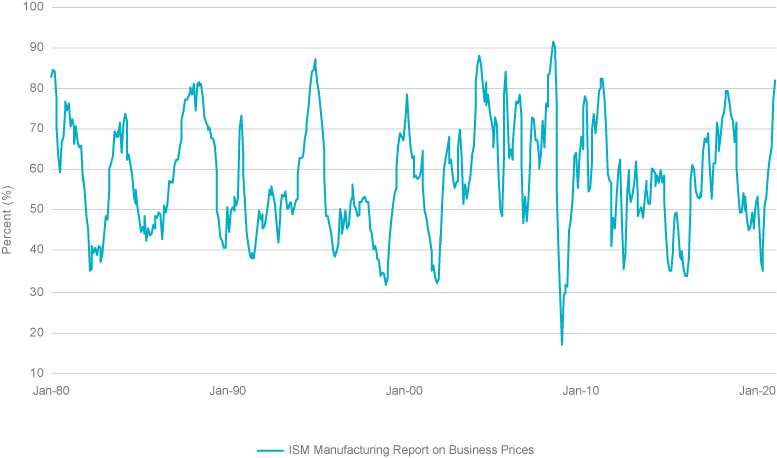 Further out, the question of repatriation of strategic industries and of deglobalization remains. Indeed, even if President Biden is more multilateralist than President Trump was, the world is unlikely to return to the era of unbridled globalization. Moreover, with shortages of masks, medical equipment and more, many industries deemed strategic are set to be repatriated over the coming years, often at a higher cost with local manufacturing. As such, higher prices are likely to materialize, but in a gradual manner over many years.

This Time Is Not Different
While we have had massive QE programs since the last financial crisis, none were on the scale seen today. Combined, the Fed, the European Central Bank, the Bank of Japan and the Bank of England have grown their balance sheets by more than 20% of their combined GDP since the pandemic began a year ago, a scale incomparable to 2009. Moreover, broad money measures, which include household bank balances, have grown too. Lending to the private sector has also risen as firms have borrowed heavily to continue operations despite pandemic disruptions. As such, the broad money supply has skyrocketed. Nonetheless, the velocity of money3 – a measurement of the rate at which money is exchanged in an economy – hasn’t moved.

Still No Pickup in the Velocity of Money 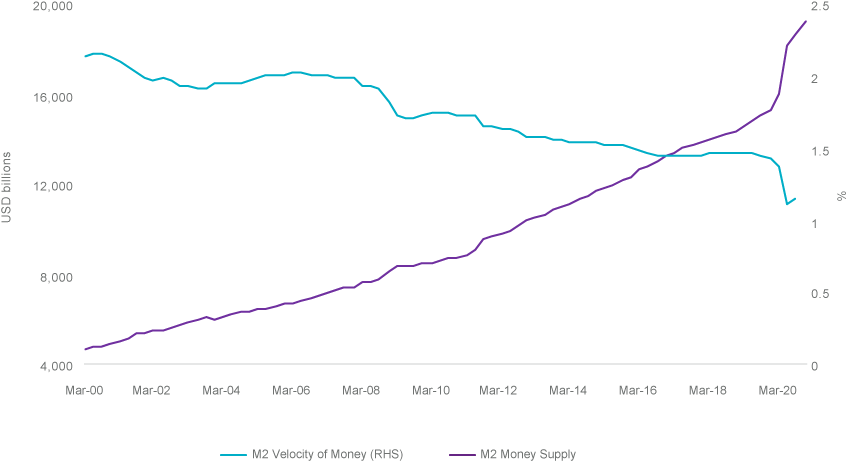 The CARES Act left US households with $1.5 trillion in excess savings in 2020 – the equivalent of 10% of annual consumption – and that is before the CARES Act II and President Biden’s recent proposals. Combined, these programs could inject an additional $300 billion per month into the economy through the end of September. In November (pre-CARES Act II), Americans’ total after-tax income was 4.3% higher than a year ago. For now, Americans do not have the opportunity to spend, suggesting this cushion will remain until economies reopen, which will then lead to a massive spending spree.

However, Americans were already shifting consumption online before the pandemic, which has only accelerated this trend. As such, it is mostly the services sector that has suffered. Indeed, while consumer spending has been down overall, retail spending on goods has been much higher, which suggest only limited potential for overheating with reopening. Moreover, even if we do see all the pent-up demand deployed simultaneously, it is likely to prove temporary.

Slack and Unemployment
Spending is set to pick up as vaccines become more widely available. However, with ongoing high unemployment and slack in the economy, even a reopening spending boom is unlikely to spur inflation, particularly not on a sustained basis. Indeed, the labor market is set to take years to recover, with unemployment not expected to fall back to 4% before 2022 or 2023. In addition, permanent unemployment has risen as a result of the pandemic as a number of jobs, especially in the services sectors, are not likely to be recovered. As such, slack in the labor market suggests prices cannot rise that much. Indeed, with so many workers on the sidelines, does the services sector have much pricing power?

The Labor Market Will Be Slow to Recover 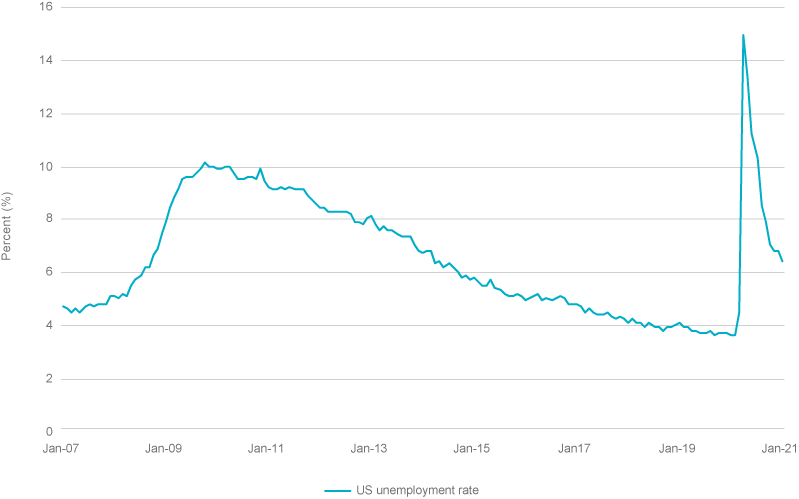 Headline CPI is likely to rise above 2% in the coming months as base effects over the spring of 2020 lead to a technical, transitory bounce in inflation. However, core measures tend to follow the services component, which is only likely to rise as the labor market tightens. A slow labor market recovery should act as a cap on core inflation measures.

Tough for Core Inflation to Rise without Services Inflation 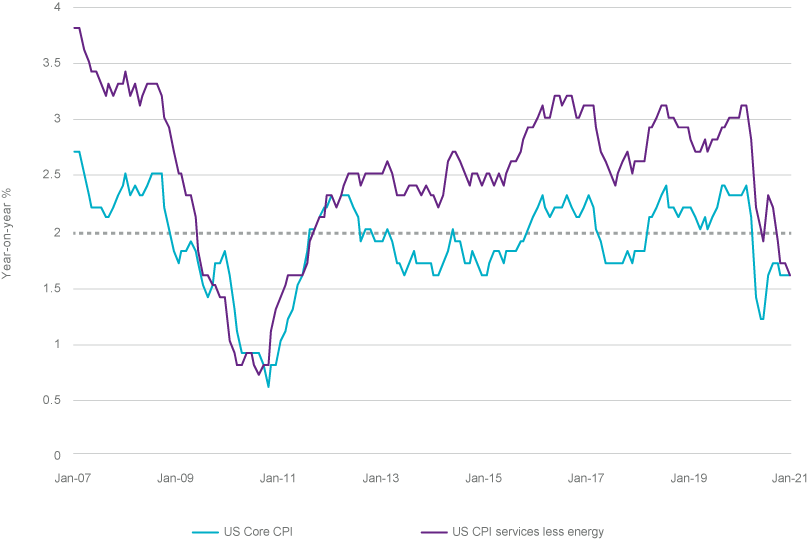 Moreover, delays in vaccinations, logistical disruptions with vaccine deliveries, and worries about new variants suggest the global economy will not simultaneously reopen in one fell swoop. This could also be the case across different US states. This suggests we are unlikely to see significant overheating, or at least not ongoing overheating.

Overall, I expect inflation to rise due to base effects and massive fiscal spending with pent-up demand unleashed with the reopening of economies, but I believe this will prove only temporary. The Fed has already stated it wouldn’t over-react, and yields should therefore remain somewhat contained.

Positioning for a Possibility
While I do not expect a big move in inflation this year, the reflation trade is set to continue to gather steam with vaccine deployment and massive fiscal spending by the Biden administration. Yields are likely to rise further and the catch-up of cyclical sectors should continue.

In this context, fixed income is set to suffer the most, especially on the sovereign debt side. While I have focused on the US, European yields are likely to rise in sympathy, even if to a lesser extent. Credit spreads have tightened sharply already, but they still have room to absorb some higher yields, making me more comfortable with credit risk than interest rate risk.

Equity markets should continue to do well as long as yields do not spike and the Fed remains on hold – my base case. Indeed, already rich valuations would further deteriorate with higher rates. Conversely, nominal earnings grow with inflation and higher inflation would be due to stronger growth, a positive for risk assets as long as monetary policy remains accommodative. Such reflation would support cyclical sectors such as energy and financials.

Commodities would be beneficiaries of an inflationary cycle, but they can still continue to recover without high core inflation as economies reopen and demand picks up. They tend to act as good diversifiers in portfolios, as would inflation-protected TIPS and gold, which both have a place in portfolios in a reflationary scenario. Indeed, real rates are set to remain low or negative with the short end of the yield curve anchored by the Fed and rising inflation pushing real yields lower.
1 Quantitative easing refers to monetary policy in which a central bank purchases government securities or other securities from the market in order to lower interest rates and increase the money supply.

2 The Consumer Price Index (CPI) is a measure of the average change over time in the prices paid by urban consumers for a market basket of consumer goods and services.

3 The velocity of money is a measurement of the rate at which money is exchanged in an economy, usually measured as a ratio of gross domestic product (GDP) to a country's M1 (money in circulation, plus checkable deposits) or M2 (M1 plus savings deposits).


This material is provided for informational purposes only and should not be construed as investment advice. The views and opinions expressed are as of February 9, 2021 and may change based on market and other conditions.

With the Creating Sustainable Value newsletter, Mirova offers you to understand the markets from a new angle and to engage in sustainable development.

PM Jack Janasiewicz on near-term market conditions – including the status of the pandemic recovery and potential effects of Biden administration proposals.