Growth concerns and recession fears have weighed on sentiment for the past few quarters, but we still do not see a recession as imminent. Today, we believe that we are more likely to see stabilization or even possibly improvements in data, rather than ongoing deterioration. That being said, this relatively rosy picture does not apply across all regions and it relies on improving geopolitical developments. Moreover, plenty of risks remain.

US Still Solid
We do not believe that one could have a global recession without a US recession, and we find US growth still solid. Q3 data is likely to show growth below 2%, but we expect overall 2019 numbers to remain around 2%, in line with trend levels.

The US economy is domestically oriented, underscoring the importance of the US consumer. So far, US consumption data has remained buoyant, barring a weaker retail sales figure for September 2019 – though a drop following a difficult August and especially following many strong months should not be a surprise. We do not expect this to be the start of a weaker trend. Consumer confidence has also held up, though again some weakness given waning tax cuts effects was to be expected. 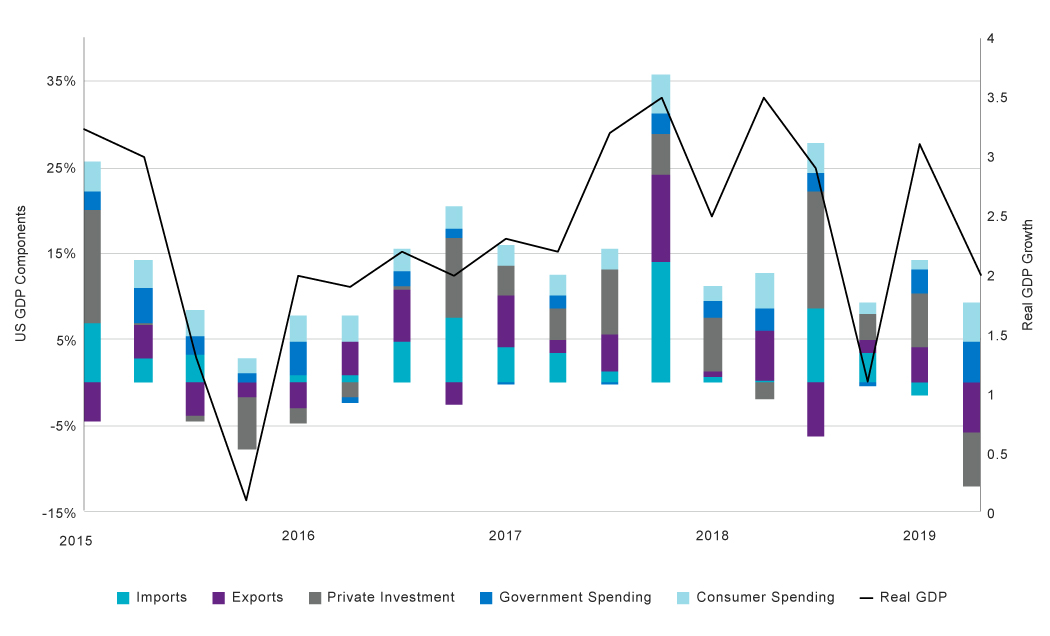 A resilient labor market and an uptick in the housing market are acting as added supports. While a slowdown in payrolls is to be expected as we advance in the cycle, employment data remains strong. In addition, jobless claims have not risen significantly, and job openings remain abundant. The housing market has shown signs of improvement thanks to lower interest rates. The latest Federal Reserve cut should be an added boost. Existing home sales, new home sales, and housing starts have all started to tick upwards. Such improvements have helped support confidence, thereby keeping underlying consumption solid.

Manufacturing has, as elsewhere, been the weak spot in US growth. With a fall in the US Services PMIs1 last month, concern grew that the manufacturing slowdown could spill over into the rest of the US economy. This does not seem to be materializing, and the recent trade truce and possible further improvements in the trade dispute between the US and China should help alleviate these fears. The global environment remains weak, and will not recover immediately even if, as we expect, we see a “phase one” trade deal signed this month, followed by ongoing gradual improvement in 2020, though a grand deal could prove illusive. Nonetheless, hope is growing that the worst is behind us, as Mr. Trump needs to ensure US growth does not slow too much for his re-election campaign.

In addition to still-solid hard data, a few thoughts to note: We believe the adage that cycles do not die of old age. Recessions do not happen because it’s time for one. They typically occur when there is overheating in the economy, which is not the case today. Moreover, given very low interest rates, solvability is not a big concern – at least for now. Finally, with renewed Fed easing, reduced interest rate differentials, and less demand for safe havens, the US dollar may no longer appreciate. It might in fact continue its recent weaker trend, another support for the US economy.

Overall, we expect growth to remain close to trend levels, and we could see some improvements in the coming quarters if trade continues to improve. Nonetheless, risks have not all dissipated: Weakness elsewhere could still weigh on US growth, and worries could grow about a potential Elizabeth Warren presidency, maintaining uncertainty and limiting business investment.

China turning a corner?
The Chinese economy is also showing signs of stabilization, and even potentially a rebound. Leading indicators such as money supply growth and credit growth appear to be rebounding, and China PMIs2 are also showing encouraging signs of bottoming. Indeed, policymakers’ ongoing targeted stimulus seems to be bearing fruit, and should have a lasting effect.

Improvements in the trade dispute with the US are also a big boost for growth prospects, helping to alleviate pressure on the manufacturing sector and lifting global demand. While China has navigated the dispute relatively well, the economy has not remained unscathed. As such, President Xi has shown willingness to move forward with gradual agreements, in order to prevent further tariffs and hopefully lead to their removal over time.

Nonetheless, China remains in a structural slowdown, albeit managed, and we expect growth to stabilize around 6% before gradually decelerating in the coming years. Encouragingly, we believe that China has done a painful but successful rebalancing of their economy, which has allowed them to be less dependent on exports.

Elsewhere in the emerging markets, we are also seeing improvements as PMIs have started to recover. Emerging market central banks were quick to cut interest rates as the Fed eased, reducing risk on their currencies and supporting growth. We are seeing fiscal reforms, and a weaker USD should act as an added boost. As such, we are now seeing improvement in the global PMI.3

Europe needs fiscal support
The Eurozone, Germany in particular, remains the weak spot in the global economy. Given ongoing weak PMIs, we believe that we have not yet seen the bottom in German growth – even as we expect Q3 data to show Europe’s largest economy is already in a technical recession. Indeed, the export-oriented economy is suffering the consequences of trade woes and weak external demand. Fears of contagion to other areas of the German economy and other European countries have risen, with reason, as other data has started to suffer. If we see improvements in global trade, Q4 could prove to be an inflection point, but we do not expect a rebound, rather just less deterioration.

The European Central Bank has pledged renewed support and a new QE program without an end date (expected by markets to last a few years), but we do not believe this will suffice to spur European growth. Fiscal stimulus will be needed to boost the Old Continent, but it may be slow to come. Unless there is an “emergency”, Germany cannot break its budget rules – and we believe it may take further poor data before policymakers feel their economy has reached that point. As such, it may still be a while before significant help comes. Still, very low debt servicing costs should allow for some “fiscal space” in many European economies, bringing some support, though not, in our view, on the scale necessary.

Good news could, finally, come from clarity on Brexit. The UK and EU have come to a Withdrawal Agreement, which was agreed “in principle” by the UK Parliament, though an accelerated timetable was then rejected. Europe has agreed to a three-month extension of the Brexit deadline to January 2020, eliminating the no-deal risk for now, and Mr. Johnson managed to get early general elections. As such, we could move forward with the current Brexit deal, and, after three and a half years, have closure on this chapter. This is by no means certain, but Brexit fatigue has everyone ready for a conclusion, and many “hard Brexiteers” would prefer a softer deal rather than no Brexit at all, increasing Mr. Johnson’s chances of getting his deal through.

Risks
We have a relatively optimistic view of the global economy, believing that recent developments point to stabilization or improvement rather than a further slowdown. That being said, risks remain, and we are not yet out of the woods from this year’s slowdown in global growth.
1 United States Services Purchasing Managers' Index (PMI) is based on monthly questionnaire surveys collected from over 400 US companies which provide a leading indication of what is happening in the private sector services economy.

2 China Manufacturing Purchasing Managers’ Index (PMI) provides an early indication each month of economic activities in the Chinese manufacturing sector. It is compiled by China Federation of Logistics & Purchasing (CFLP) and China Logistics Information Centre (CLIC), based on data collected by the National Bureau of Statistics (NBS).

3 The Purchasing Managers’ Index (PMI) is a measure of the prevailing direction of economic trends in manufacturing. The PMI is based on a monthly survey of supply chain managers across 19 industries, covering both upstream and downstream activity.

It’s time to challenge many of the biggest misconceptions about ESG and sustainable investing so that conversations can be more productive.