We hold a relatively constructive view on markets, expecting risk assets to grind higher in the coming months. We also believe that sovereign yields might drift higher, though they will not back up sharply given low inflation and ongoing central bank easing. But this view implies a number of assumptions on major geopolitical uncertainties and how they could play out. Here are our views on these scenarios.

Trump & trade
Global trade tensions, initiated by President Trump and the US, have been the biggest source of uncertainty for markets in the past year. And while we have seen many reversals, our base case has not changed much. We continue to believe that a sweeping trade agreement is unlikely before 2020.

Being “tough on China” has worked well for President Trump, and being able to announce a big win during his re-election year would be welcome, implying little incentive for a deal in the short term. Since the May, and mainly the August re-escalations, we became even more cautious on this expectation, as both sides have grown further apart, making a far-reaching agreement more difficult. Indeed, intellectual property and technology development are difficult topics to agree on. As such, we have been expecting a series of mini-deals to cover easier ground, starting with an October agreement of more agricultural purchases in exchange for easing of Huawei-related export bans. These mini-deals should also lead to a reduction in tariffs – or at least a further postponement of pending tariffs.

Recent impeachment proceedings could however impact this view, as Trump may want to deliver a win amid these tensions. President Xi could also think his hand has strengthened and it is worth getting a bigger agreement now. In addition, Trump needs to avoid a US recession in the coming 12 months, and will therefore navigate trade more carefully, finding ways to ease the tariff burden without looking like he is making too many concessions.

Elsewhere, other countries have been waiting to see if the US president would turn his trade ire on them. Japan seems to have escaped for now, though it is embroiled in a trade dispute with South Korea. But the bigger trade question lingers over Europe, which is already facing a significant slowdown due to slower global trade and demand. Our view is that President Trump would only start a bigger trade dispute, broader than the Boeing/Airbus case, once his dispute with China concludes. However, he may also want to distract from impeachment proceedings with a new focus on European trade.

From an investment perspective, we remain optimistic that growth concerns on the US and domestic political issues mean that a further escalation is unlikely, and that smaller agreements are likely in the coming months.

Brexit
Over three years have passed since the UK voted to leave the European Union, and the Brexit saga still has no end in sight. We see four possible scenarios ahead. The risk of a no-deal Brexit on October 31 rose following Boris Johnson’s nomination as prime minister, but we still see this as only a remote possibility (15%). Indeed, Parliament has made it clear it wants to avoid such a scenario and has taken steps to force Johnson to ask for an extension. With the proroguing of Parliament deemed unlawful, MPs are back and they will ensure their law is airtight. Moreover, while some EU leaders are growing impatient with the Brexit stagnation, we do not believe any will want to singlehandedly force a no-deal scenario.

We have long held the view that a version of former Prime Minister Theresa May’s withdrawal agreement could still get approved, delivering a soft Brexit (20%). This seemed less likely over the summer, but this may now be Johnson’s best chance of delivering Brexit by his October deadline. While there has been little progress, we believe that some tweaks to the Irish backstop, possibly changing the language to resemble the accompanying letter, could be enough to get Parliament’s (reluctant) approval. To many, a soft Brexit is better than no Brexit at all – a risk if the UK holds a new referendum.

So how likely is a second referendum? A number of parties have stated their willingness to ask the people again, including Jeremy Corbyn, the Labour leader. As such, if Labour wins (unlikely) or if we do not get a majority at the next general elections, this might be the next step (25%). In such a scenario, the possibility of no Brexit at all rises.

Our view is that Johnson will be forced into a new extension, thereby setting up new elections in November. We believe he will win a majority, albeit small, and remain constrained by Parliament, thereby prolonging the saga further. Indeed, Parliament will likely continue to ensure he cannot have a no-deal exit in January, either forcing him into new negotiations with the EU or asking for more extensions. As such, status quo is likely to persist for some time yet (40%).

In this context, we believe that sterling should remain range-bound, with upside potential should an agreement get done in October. European assets would also be lifted by the removal of a great uncertainty, though other obstacles remain.

German fiscal stimulus
While we do not expect a US or global recession for some time, the same cannot be said with as much conviction about Europe, given its largest economy – Germany – is likely already in recession. Indeed, we expect Q3 data to show that Germany has had another quarter of negative growth. With these expectations, hope has grown that Germany would finally relax its purse strings and provide some much-needed fiscal stimulus to its ailing economy. 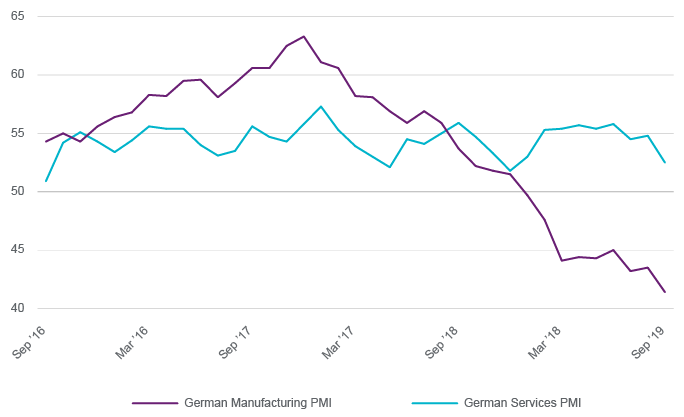 However, the answer is not so simple, as German policymakers locked themselves into fiscal discipline following the global financial crisis. As such, fiscal easing is only possible if there is an “emergency.” There are a number of ways they can get around this, by announcing an emergency (but two quarters of mildly negative growth might not qualify), adding to infrastructure projects, or expanding their climate initiative. The latter was started in September with a ten-year spending plan, though the size was below expectations and the initiative is meant to be deficit neutral. But it was a first step.

Pressure has come from the European Central Bank and is likely to increase with Mrs. Lagarde’s arrival in November. Other European countries have shown more inclination towards fiscal leniency to boost a fragile European economy. As such, we believe that some stimulus will materialize, but it will take some time.

Any expectations or serious possibility for German spending is likely to halt the fall in Bund yields, thereby lifting yields globally. In addition, European equities should see more demand, though good news on Brexit might be needed as well.

Middle East tensions and oil
When we wrote about oil over the summer, growth concerns were the main driver of prices, as simmering Middle East tensions and OPEC+ production cuts had failed to support prices. However, with the recent attack on Saudi Arabia’s largest production facility, oil prices have climbed. The news that production would be back online quickly capped the initial spike, but we expect oil prices to embed a higher risk premium going forward, implying they will settle higher than over the summer as production security concerns persist.

In terms of the geopolitical risks in the region, we could see an escalation of such actions, as we have seen few repercussions from the US or Saudi Arabia, which could embolden Iran and its war-by-proxy. We still do not expect military conflict or on-the-ground US action, as actions are likely to remain non-civilian.

US domestic politics
While we try not to speculate on politics, we must still mention President Trump’s possible impeachment in light of the latest US political developments. The Democrat-controlled House has started the proceedings, and while it may pass this vote, it appears unlikely that enough Republicans will support this measure in the Republican-controlled Senate. Nonetheless, this could be a lengthy process and a distraction.

Trump could ease pressure on Beijing to announce a trade deal sooner than anticipated. Or he could toughen his stance on trade and even announce tariffs on Europe – on automobiles, not just airplanes, opening a new page in his trade wars.

In terms of global market impact, markets are likely to ignore proceedings unless it looks like some Republicans are turning on the president. Heightened uncertainty could lead to volatility, which should dissipate if Trump pulls through. We tend to agree; until we see conclusive moves against Trump from Republicans, we maintain our overweight allocations to equities.

Conclusion
Overall, we look at these situations with relative optimism, expecting some form of improvement or resolution, though the timing remains in question. We maintain our constructive view on risk assets, believing that equity markets can continue to grind higher in the coming months. We still hold some core sovereign debt as protection, and we look for flexible, absolute return strategies to help navigate what promises to be a volatile and fast-evolving environment.
Commodity-related investments, including derivatives, may be affected by a number of factors including commodity prices, world events, import controls, and economic conditions and therefore may involve substantial risk of loss.

Results from the 2019 Global Survey of Professional Fund Buyers predicted increased equity volatility and illustrate how professionals have been positioning portfolios for riskier market scenarios.

What a crisis event is and how trend-following strategies began searching for crisis alpha as the virus spread is examined by AlphaSimplex’s Chief Research Strategist.

A look at whether investors can expect a short or prolonged market downturn as a result of the COVID-19 pandemic.