By browsing this site you accept the site’s cookies, which provide us with data used to personalize our interactions with you. Accessing social networking sites from this site may also require the use of cookies. You may refuse, change, or learn more about your cookie settings in our Cookie Policy.

The daily cascade of news about global unrest – ranging from Brexit to Venezuela's power struggle – makes it difficult for investors to weigh risk, but one theme stands apart as a significant immediate threat: a rising China.

China’s tenacious pursuit of competitive advantages in technology, infrastructure and trade poses the biggest threat to the US economy and markets, and puts policy makers at a critical juncture to prevent a profound rebalancing of global power, said Michèle Flournoy, co-founder and managing partner of WestExec Advisors and former undersecretary of defense for policy under President Obama.

Speaking at the inaugural Natixis Exchange event in New York, Flournoy said, “We need to focus on how we will compete more efficiently, while not putting ourselves on a road to conflict with China.” Hosted by Natixis Investment Managers in partnership with Barron’s Group, the April 3 Exchange offered insights on investing in an uncertain world. She added, “China has shifted from focusing internally and hiding its long-term intent, to making a play to be the dominant power.” 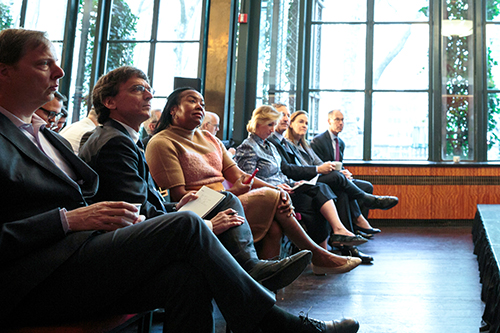 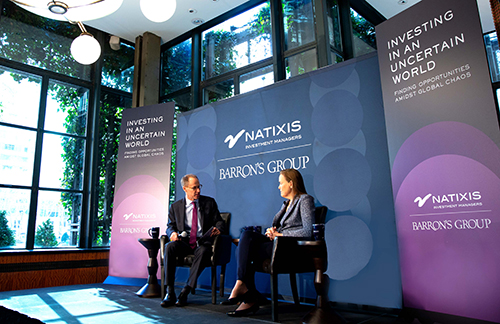 The country has some powerful advantages. Given the Chinese government’s deep control over all aspects of its society, it can take a long view without political disruptions, use the state to make mass investments in technology and artificial intelligence, require data sharing from the private sector and deploy technologies more quickly without great concern for privacy. “That sets them up to leapfrog ahead in certain areas if we don’t play our cards right,” Flournoy said.

Deeply concerning is Italy’s sharp break with its allies in March when it signed on to China’s vast global infrastructure expansion plan known as One Belt One Road. In the 11th hour, the US scrambled to dissuade Italy from signing on to the deal, but it was too little, too late.

The US is right to view the deal as a strategic threat, Flournoy said. “China wants to secure all of its trade routes. It wants to be a power with global influence and is using infrastructure investments to create relationships with countries so there’s a certain indebtedness, so China can use that for greater influence.”

Meanwhile, China’s telecom giant Huawei, the technological backbone of the infrastructure grab, poses a serious espionage threat and a potential national security threat. US intelligence officials and lawmakers have been right in flagging the potential for China to harness Huawei’s capabilities for illegal data-gathering and spying, particularly in the highly competitive development of next-generation 5G technology, Flournoy said.

“The move to 5G is going to be revolutionary. It will improve internet speed, reduce latency and improve the digital economy,” Flournoy said, adding that so far, US tech giants Intel and Qualcomm have developed pieces of the end-to-end technology, but not the entire network.

But the administration hasn’t been doing what it will take to prevent the expanding footprint of China – or the receding influence of the US. It has created a protectionist atmosphere with policy moves, such as withdrawing from the Trans-Pacific Partnership and independently addressing trade concerns with China. Instead, Flournoy said the US should be reaching out to allies who share the same concerns about the balance of global power to create a united front in addressing China.

If the US continues to alienate close trading partners and allies, it will create a division in the trans-Atlantic community – an opening that China will be happy to step into with favorable trade terms or technology, Flournoy said. “The only way to balance a rising China and the impact it will have is to join arms with our allies.”

And the only chance the US has at maintaining competitiveness over the long term is if it shifts its domestic priorities and makes bigger investments in education – particularly in programs in science, technology, engineering and math – and research and development.

Meanwhile, to strengthen relations, the US should make a better effort at finding ways to cooperate with China on shared interests such as climate change, non-proliferation of nuclear weapons and establishing cyber norms. After all, Flournoy added, with the right moves, China can be a competitor without being an adversary.
The Belt and Road Initiative (BRI), also known as the One Belt One Road (OBOR) or the Silk Road Economic Belt and the 21st century Maritime Silk Road, is a development strategy adopted by the government of China involving infrastructure development and investments in countries in Europe, Asia, and Africa. "Belt" refers to the overland routes, or the Silk Road Economic Belt, whereas "road" refers to the sea routes, or the 21st century Maritime Silk Road. Until 2016, the initiative was officially known in English as the One Belt and One Road initiative, but the official name was changed as the Chinese government considered the emphasis on the word "one" prone to misinterpretation.

Brexit is the withdrawal of the United Kingdom from the European Union.

Fifth generation wireless (5G) is a wireless networking architecture which aims to increase data communication speeds by up to three times compared to its predecessor, 4G.

Inflation is unlikely to be a concern amid an accommodative monetary environment, while risk assets remain attractive despite the risk of reversals, writes Esty Dwek of Natixis IM Solutions.

Healthcare spending and government balance sheets are just two of the pandemic responses likely to last for some time, writes Mirova’s Amber Fairbanks