In the search for high-yielding, global, diversified assets, it’s possible that investors are overlooking assets they don’t even realise have investment potential. Every time we take a  business trip, go on a family holiday, take a weekend break to a nearby country, we make use of airplanes. There are so many types of planes, working so many routes, performing so many roles, that it’s a natural asset to invest in for income, diversification and capital growth. Yet few investors invest in aircraft asset class. Let’s take a look at why institutional investors should seriously consider aircraft as an asset class.

A world of opportunity

Commercial aviation is really the most global of businesses. Aircraft connect all the countries in the world, shuttling people and freight between 3,190 cities and 3,250 airports. Air traffic has grown by 8% on average every year for the last 50 years and there have only been three years of negative air traffic growth in that time. This compares with many more down years in world stock markets. Despite some high-profile failures, the airline industry has succeeded in increasing its profits over the last decade too. 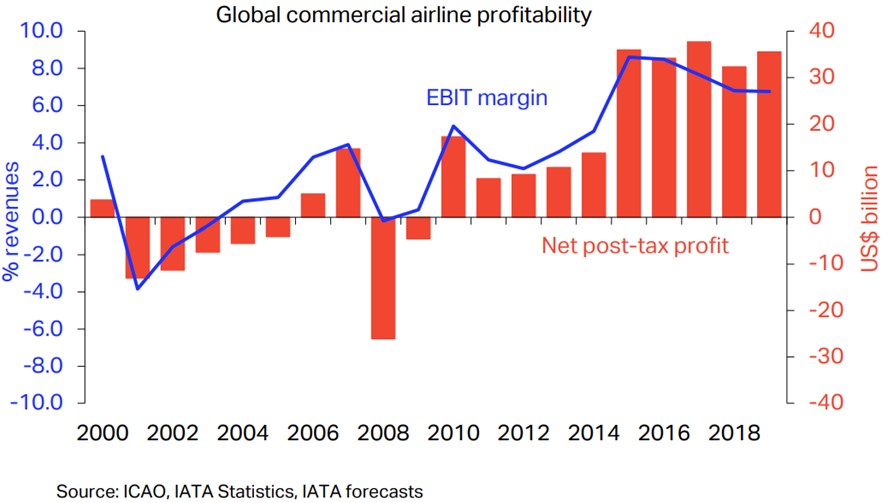 In short, this is a pretty resilient market, and long-term future growth is expected to remain strong. Air traffic is forecast to double in the next 15 years and to grow by an average of 4.7%1 a year over the next 20 years. Rising air traffic requires more aircraft. Today’s fleet is concentrated in the US and Europe and numbers around 24,000 aircraft. Both Boeing and Airbus see this fleet doubling in the next 20 years. Add to this the replacement aircraft needed to replace vintage planes and we will need around 40000 new aircraft over the next
20 years1.
This growth represents significant opportunity for investors to provide either equity or debt on these new aircraft. Mid-life aircraft are also an additional source of opportunities.

How credible are these growth projections for air traffic? And what will drive the growth?

The single biggest driver is the “wealth effect”, the increase in disposable income globally as the middle classes grow in emerging economies. In 2002, about a quarter of the world could be described as “middle class”; today that has risen to about 40% and by 2037 it is likely to encompass over 50% of the world’s population. That (by 2037) means there will be some 5bn people with sizeable chunks of disposable wealth looking for new experiences and leisure opportunities.

As the wealth effect accelerates, consumer spending on travel and tourism continues to grow. International tourist arrivals rose by 7.1% in 20172 and there were nearly 350m more
international tourists in 2017 than in 2010. That trend is projected to continue. Given that tourism growth tends to spark higher economic activity, governments around the world are encouraging air travel, creating open skies policies and, where security allows, relaxing visa and immigration requirements.

Social media is also driving tourism. Images that appear on apps such as Instagram, Facebook and Snapchat are helping to popularise tourist destinations. Even in the US, a relatively mature market, there is still opportunity for growth, with the number of passport holders increasing dramatically. Whereas in 1990 just 4% of US citizens held a passport, today that number is 42%, with more than 20m issued in 2017, the highest number recorded in a single year.

Asia will soon be world leader in air traffic


The middle classes in both China and India grew from a combined 100m in 2007 to around 400 million by 2017. In the next decade, a further 300m people are forecast to enter the ranks of the middle classes in these countries alone. These changes are important for air travel demand. Although there is still room for growth in developed markets, emerging markets will provide most of the upside in air travel. In fact, Asia-Pacific will have the most global air traffic by 2037, with a three-fold increase in passenger journeys between now and then. Air traffic between emerging countries is forecast to grow by about 6.2% a year, and will represent 40% of world traffic in 2037, up from around 29% in 2017. Chinese traffic is forecast to grow by a factor of 3.5 times, with US domestic flights increasing by 50%, but from a much higher base3.

The number of air passengers in China has risen at an average of more than 10% every year since 2011, while India’s economic coming-of-age has led to 20% passenger growth a year in its domestic market. India is expected to become the third-largest aviation market by the early 2020s.

Aircraft come in all shapes and sizes. While certain models dominate the market, each route has its own needs and its own aircraft requirements, so many types of aircraft are in service worldwide.

From an investor viewpoint, one great aspect of aircraft is that they are mobile and fungible. In simple terms, an aircraft owner should not have too much difficulty taking an aircraft from one operator in one part of the world and leasing or selling it to another operator in an entirely different part of the world. For this reason, aircraft have low-volatility valuations which reduces the chances of capital loss compared with other asset classes. As long as airline is up and running, aircraft owner or financing company should get a fairly predictable stream of income. Making sure this happens takes know-how and skill, admittedly, but that’s the job of the fund manager. In order to secure value from investing in aircraft asset class, fund managers must manage a raft of risks, including loss of capital, counterparty risk, creditworthiness of lessees, jurisdictional and repossession risk, aircraft value and operational risk.

With good asset selection and careful risk assessments, returns tend to be in the order of 5%-12% for equity investors, whereas for debt investors returns begin at 75bps above the risk-free rate and rise to 300bps (or sometimes more) above the risk-free rate for vintage aircraft. Aircraft as an asset class is suitable for most long-term institutional investors. Investors are able to choose their level of risk and return by investing in either equity or debt, in different types of aircraft and by engaging with different counterparties in different jurisdictions.

The aviation industry takes action to mitigate its environmental impact

Sustainability is high on many institutions’ investment priorities and aircraft operators recognise that they will only continue to receive investor support if they manage their  environmental impact well. Today, air travel creates about 2% of global man-made carbon emissions and the UN Intergovernmental Panel on Climate Change says this will rise to 3% by 2050 if no action is taken.

ESG fixes are being sought throughout the industry and broadly fall into three categories: airplane design and engines; advancement in airspace management and airline operations; the development and commercialization of sustainable alternative fuels. In particular, a flagship sustainability project, the Carbon Offsetting and Reduction Scheme for International Aviation (CORSIA) was set up in 2016 by the International Civil Aviation Organization (ICAO). The scheme, managed under the auspices of the United Nations, is designed to offset international aviation CO2 emissions and 192 countries have signed up to it.

Is this the right market for investing in aircraft?

When investors get comfortable with the idea of buying or financing aircraft, they inevitably start to ask about markets. Is there a downturn around the corner? Are airlines financially viable? Will fuel prices spike?

There is, of course, no way to tell. But history tells us that aircraft deliveries are robust across cycles. We noted earlier that air traffic has enjoyed a strong trajectory with very few bumps, and profitability within the industry has risen over the long term. Investing in aircraft tends to be a longer-term activity spanning a cycle or several cycles. It has been relatively
immune to those cycles in the past and there is no known reason why this should change going forward.
1 Source: Boeing Commercial Market Outlook 2018-2037
2 According to the World Tourism Organization
3 Source: Airbus Global Market Forecast, published 2018 (2018-2037)

The constant growth in demand for passenger air travel, combined with airlines’ improvement of their capacity management, have led to an enhanced profitability of the industry.