There is a direct correlation in the aircraft industry: growing air traffic equals more planes. The equation is simple, but the size of the numbers on each side of that equation is less well known. Air traffic is forecast to rise by 4.7%1 a year for the next two decades, with a consequent need for around 40000 new planes1.

Some of those planes will service new routes and new airlines, some will replace older planes. All of them will require financing. With banks expected to be more and more impacted by regulation, much of this financing will come from capital markets and private lenders. Aircraft financing is a growing feature of both public and private debt markets.

Aircraft financing is projected to nearly double from $90bn-plus in 2012 to some 180bn-plus by the end of 2022. For fixed income investors, this represents an emerging debt asset class to complement their existing credit allocation.

The advantages of aircraft debt are long-term and predictable cash-flows, true portfolio diversity linked to real assets, yield pickup linked to the illiquidity of the asset class, and volatility reduction in the wider portfolio.

How does aircraft lending work?
Both aircraft leasing companies and airlines require financing. Airlines and leasing companies (lessors) use various types of financing to buy commercial aircraft from manufacturers including Airbus, Boeing, Embraer and so on. These aircraft may be used to service new routes, to increase traffic on a popular route, or just to replace retired aircraft. “With demand for travel growing at a strong pace, operating lessors have been an important source of funding for airlines in a capital-intensive industry,” says Aymeric Angotti, Head of Aircraft Finance, Ostrum Asset Management.

Aircraft deals are structured through investment vehicles (called special purpose companies or SPCs) that typically buy an aircraft and lease it to an airline. The important point about aircraft debt structures is the mortgage on the aircraft, so the lender can legally repossess the aircraft in a timely manner. The lender is then able to lease it or to sell it in the case of default.

Unlike a property, on which a mortgage can also be secured, the beauty of an aircraft is that it is a mobile and fungible asset; you can take it from one airline and have it operated by another airline, in a different part of the world. After all, an A320 operated by Lufthansa is still an A320 when it is operated by Latam in Brasil.

The aircraft debt is secured on a stable asset, given that a plane’s economic life is around 25 years, compared with the average loan term of around 12 years. In addition, volatility in the value of aircraft is low, only reaching 20%-25% in the most severe crises2. Both these factors lead to high recovery levels in the case of loan default.

From a simple structure (one aircraft for one airline) to a portfolio of mid-life aircraft leased to various airlines, aircraft debt market offers a wide range of opportunities to investors.

What to buy, how much to pay?
Aircraft loans cannot be bought and sold on exchanges in the same way as listed bonds. Aircraft loans are illiquid because the secondary market is small, with only a few buyers and sellers. It takes time and knowledge to analyse the transaction, the counterparty, the asset, the structure and the legal documentation before deciding whether to invest.

Doing all this successfully results in an illiquidity “premium”, which provides investors with yields that can be considerably higher than for bonds with similar risk profiles.

Sourcing requires access to a strong network of banks across the world, but also to contacts within other originators of deals, including airlines and private equity groups.

Similar experience and industry knowledge apply to asset selection. “There is little publicly available information on aircraft secured debt and no secondary markets, so initial selection of assets is challenging and a key part of our job,” says Angotti. A deal must be examined on several different levels, including analysis of the corporate or counterparty, the asset itself and the structure of the deal.

The corporate rating is based on a robust third-party framework, namely the well-known S&P Global Market Intelligence methodology. The asset, meanwhile, is ranked by its type, its age, the number of operators, the fleet size, or where it stands in its lifecycle, with one question in mind: how easy will it be to sell?

ESG considerations also form part of asset selection. Lending to airlines which have a poor record on social issues risks impairment of credit risk through strikes, fines and loss of business.

Liquidity is also essential. If an asset is not performing – perhaps because the airline is distressed and no longer making regular payments on its loans – it is essential to know beforehand how easily the aircraft can be repossessed and sold to another airline. In some countries this process is easier than in others, and some assets, particularly the popular, narrow-body aircraft, are easier to trade than others.

Ostrum has developed its own tool which compares outstanding debt and aircraft value throughout the lifecycle of the asset. Part of the value equation is how quickly the aircraft can be repossessed. Depending on the jurisdiction where the asset is operated, the time for repossession can be anything from 60 days to a couple of years. Getting this equation wrong can be very costly for the lender.

Loan to value, maturity of the debt, aircraft age, aircraft expected values, which are also assessed thanks to an internal tool, repossession and remarketing costs are also critical hypothesis.

Last, and definitely not least, the lender must rigorously monitor the performance of both the loan and the aircraft. It is not enough to service the loan itself; the lender must also inspect the aircraft and be sure that the aircraft is flying regularly. If not, why not? It may, for instance, have been broken up for spare parts, which is a disaster for the value of your guarantee and sends a danger signal to the lender about the financial stability of the borrower. If the borrower cannot pay for new parts, what does that mean for its ability to service its debt?

Potential returns
Managing the risks of aircraft debt appropriately can mean the strategy has few, if any, unexpected losses.

Historically, senior secured loans against highly-fungible assets such as aircraft result in a median default recovery rate of some 98%.3 This compares with a 77%4 recovery rate in senior infrastructure debt. The high recovery rates in aircraft debt help to produce better risk-adjusted returns compared to comparable fixed asset classes.

This can lead to yields for aircraft debt investors starting at 75bps above the interbank lending rate, which is a typical return for the financing of widely-used narrow-bodied aircraft leased to a first-tier airline5. Yields can also rise to 300bps above the interbank rate, and sometimes higher, for deals involving pools of old vintage aircraft. 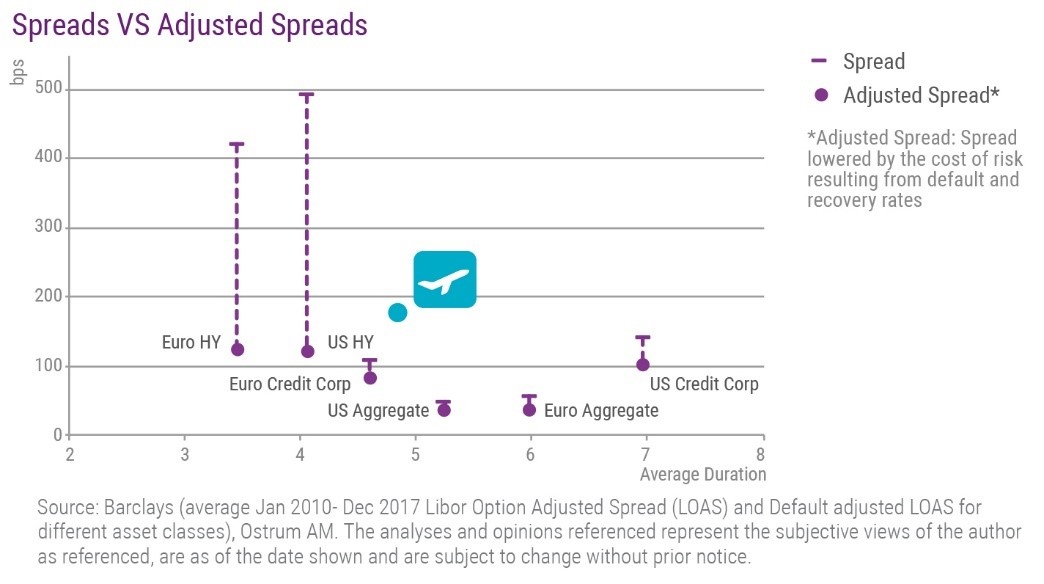 The strategy offers long-term and predictable cashflows, with payment schedules that are fixed from Day One of the transaction.

“Margins have decreased slightly since over the 10 years since the financial crisis, but inefficiencies in aircraft secured debt market are an opportunity for experienced asset managers” says Angotti. These inefficiencies stem from the nature of the deals, which are transacted bilaterally or in small club deals. As a result, margins are not standardised as they are in large syndication deals.

So two aircraft transactions can have similar risk but very different pricing. This can happen if, for instance, an airline experiences temporary difficulties in raising financing for political reasons. Or when banks in a certain territory have higher funding costs so need higher margins. Both these examples would increase returns to investors.

The yield pickup and the cash-flow profile suit many types of institutional investors, with insurers having shown particular interest in the asset class.

Conclusion
Aircraft are attractive to institutional investors for their very tangibility. Loans secured against real, solid and useful assets is proving popular among an increasing number of investors. These investors are reassured by the high recovery rates, the lack of correlation of aircraft debt to bond markets and the regularity of capital and interest payments.

“The challenges of operating in this market are considerable, but asset managers with structuring experience gained at major investment banks combined with knowledge of the sector and of the assets, should be able to find added value,” Angotti adds.
1 Source: Boeing Commercial Market Outlook 2018-2037

2 Ostrum study of market value from 1984 to nowadays

Many institutions, sovereign wealth funds and family offices ploughed in to government bonds 10-15 years ago when yields were attractive. Those bonds are now maturing and need replacing.