Investors looking to align their investments to the long-term objective of the Paris Agreement might have felt loss in front of the various low climate-oriented approach. The new Paris-aligned benchmarks (PAB) have brought some clarity.

These benchmarks are designed to keep global warming to 1.5C above pre-industrial levels by 2050. The target is clearly stated compared to other ESG approaches, which may seek to reduce carbon emissions, but do not necessarily have such specific target.

An effective implementation of the Paris Agreement has to be forward-looking, through the selection of companies that have clear, achievable plans to improve their ESG profile and effectively mitigate climate change

With the Paris-aligned benchmarks, investment managers can not only pick companies that can make a difference, but actively encourage these and other companies to do so through selection and engagement

The Paris Agreement, a legally binding international treaty on climate change, was adopted by 196 countries at COP 21 in December 2015. Ever since, the EU has sought appropriate financial benchmarks to ensure the agreement is translated into real-world action.

The low-carbon strategies which spang up in the wake of COP 21 have typically excluded controversial activities and typically sought carbon reduction at inception of around 30%-40% compared with mainstream indices.

It might be expected that the increasing weight of investor expectations and strategies since COP 21 would have led to companies across the board striving to reduce their carbon emissions. This has not materialised yet: in fact, between 2020 and today, carbon emissions from companies in the Bloomberg Developed Markets Large & Mid Cap index have actually increased. 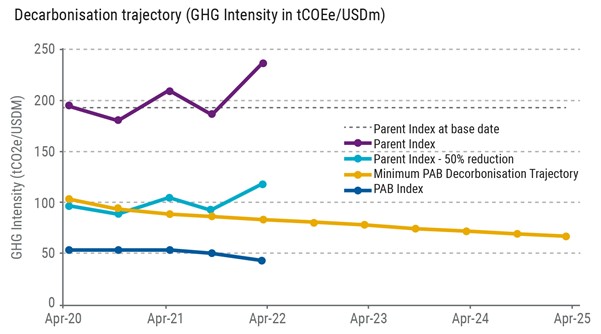 Source: Bloomberg, Ossiam. Past performance does not predict future results.


Paris-aligned benchmarks were conceived to drive the Paris agenda in a more targeted and effective way. Introduced in 2019 by the European Commission, PABs require a minimum 50% reduction in Greenhouse Gas (GHG) emissions compared to a parent index at launch and a 7% reduction of emissions every year after that. This methodology aims to ensure that emissions reduce to net zero by 2050.

PABs must also adhere to the EU Taxonomy Regulation’s “Do No Significant Harm” (DNSH) requirements by excluding companies significantly harming at least one of the 6 EU environmental objectives.

A forward-looking benchmark, backed by data

The effectiveness of PABs relies on data. Ossiam, an affiliate of Natixis Investment Managers, partnered with Bloomberg to launch its PAB approach, in recognition of Bloomberg’s wealth of corporate data and its ability to process data to create genuine informational advantages. The resulting benchmark was able to encompass reports and estimates from some 50,000 companies.

“We wanted to work with an independent organisation that could run the rule over a huge number of companies especially regarding carbon estimates for non-reporting companies” says Paul Lacroix, head of structuring at Ossiam.

An advantage of this approach is that the benchmark is both forward-looking and has science-based data to back it up. High-polluting companies are not de facto excluded from the benchmark if they are committed to reach net 0 carbon in 2050, “We want to encourage companies to set science-based targets.”. However, if they fail to follow their plan or to reduce emissions by at least 7% in any one year, they will be replaced in the benchmark.

The challenges of assessing companies’ ESG performance can be met with a thoughtful methodology.

PAB strategies should follow the United Nations’ precautionary principle that company emissions data should not be underestimated. Many companies do not fully disclose their carbon emissions data, so benchmark providers must make an estimate based on industry averages. This means the estimate can be better than the actual carbon profile (particularly of heavy polluters) which discourages the future reporting of actual emissions.

Bloomberg uses a machine learning model to produce its estimates and, from these, builds in an appropriate cushion for carbon emission levels, to respect the precautionary principle. This prevents biases in the index and, further, encourages companies to disclose their actual carbon emissions.

Clear, sector-specific analyses can be applied to test the do no significant harm (DNSH) principle. DNSH is much broader than a standard controversy data set and requires more detail.

DNSH helps to avoid one aspect of greenwashing: PAB indices exclude companies which score highly on one of the 6 EU environmental objectives, but poorly on others. For example, investors may see the inclusion of electric vehicle makers in a portfolio as being good for their ESG profile and for climate change. But what if an EV maker helps reduce pollution in city centres, but is poor at recycling batteries from the vehicles or sources lithium from mines in an unethical manner? With the DNSH such company will be excluded.

Lacroix says: “This is one area where Bloomberg has a significant edge: it can map all ESG factors and objectives for all companies in the index. Many data providers are unable to handle the size and detail of data required.”

Just as obtaining comprehensive carbon emissions data from companies poses challenges, so applying the DNSH test is challenged by a lack of corporate disclosure. In addition to excluding companies which do not pass the DNSH test, the Ossiam/Bloomberg solution adds a second filter: it also takes into account the level of compliance with DNSH in the weighting scheme, making sure that the positive impact of the PAB index is at least equal to the level of the benchmark.


PAB indices are set to be building blocks

The resulting indices are pure when it comes to meeting the ideals of the Paris Agreement. PAB indices respect all the relevant rules but, importantly, do not insert additional ESG criteria which can muddy the water and obscure the path to the 2050 goal.

As well as offering clear expected outcomes, PAB indices must be able to provide investors with the tools to switch exposures when they need to. Ossiam views PAB indices as building blocks for investors to execute their allocation decisions. PAB indices, Ossiam believes, must meet geographical allocation needs, including niche geographic segments such as Canada, Japan and Asia Pacific ex-Japan.

If investors are to deploy PAB indices as core holdings within their equity buckets, it is also important that the PAB indices are as close as possible to mainstream indices in terms of tracking error.

There must be flexibility too. Guidelines for PABs are set out in details but are likely to evolve as policymakers see potential improvements, so index providers must be able to evolve too. For instance, in the future, the EU is likely to address green energy production in the benchmark.

“There are no criteria for green energy yet and we can expect the EU to continue to update its rules to do so,” says Lacroix. “There is no final state for PABs, so index providers must be nimble enough to adapt their methodologies.”

Conclusion: the future of benchmarks?

Paris-aligned benchmarks are relatively new, but they are attracting the attention of growing numbers of investors.

These investors seek financial returns, but also an approach which is beneficial to other stakeholders and contributes meaningfully to solving the climate crisis.

“We think, in time, PABs will be the future benchmarks for the majority of strategies,” says Lacroix.

Published in November 2022.
Ossiam
An affiliate of Natixis Investment Managers
French société anonyme governed by an executive board and a supervisory board
with a share capital of 261 240 €
RCS Paris – 512 855 958
36 Rue Brunel, 75017 Paris
www.ossiam.com

How computing power can extract alpha from complex ESG data