Improving long-term growth forecasts resulting from the Covid-19 vaccine rollouts are generating questions about inflation – an increase in prices and a decrease in the purchasing value of money. Mid-December data on the global money supply has generated inflation talk among some notoriously bearish pundits. There are concerns that there is too much money in the system – that if too great a supply of money is facing too few goods, inflation will follow. The bigger worry here is that policymakers see a need down the road to apply the brakes and manage inflation by increasing interest rates. Any rate increase would have widespread implications, given the amount of low interest rate debt taken on by governments as part of their pandemic fiscal aid packages. Below are some thoughts on the inflation issue.

Money, It’s a Hit
The chart below is what some pundits are getting all worked up about. “M1” refers to the money supply composed of physical currency, checkable deposits, and negotiable order of withdrawal (NOW) accounts. Think of it as the most basic definition of “cash” – readily available where and when you need it. Note the huge increase in M1 that began in early 2020.

This has got to be inflationary, right? After all, economist Milton Friedman once said “Inflation is always and everywhere a monetary phenomenon, in the sense that it is and can be produced by only a more rapid increase in the quantity of money than in output.” Well, yes. But not really.

Get Back
It’s not a coincidence that M1 took off in March – that is when the US Federal Reserve announced its “full commitment to new measures” in response to the Covid-19 crisis and when the CARES Act ($2.2 trillion in fiscal response) was finalized. This federal aid response is worth unpacking a bit. In the most basic sense, the US Treasury issued bonds. Where did the money to buy those bonds come from? Effectively, the Fed, which bought them through their asset purchase program. The Treasury then used the proceeds from those bond sales to pay for the CARES Act, which provided fiscal aid – in the form of $1200 checks, for example.

Here is a chart showing changes in US personal income that occurred as a result of the Covid-19 pandemic and the federal aid that followed. The purple bars show aggregate income – note the huge drop in March and April as the lockdown took hold. 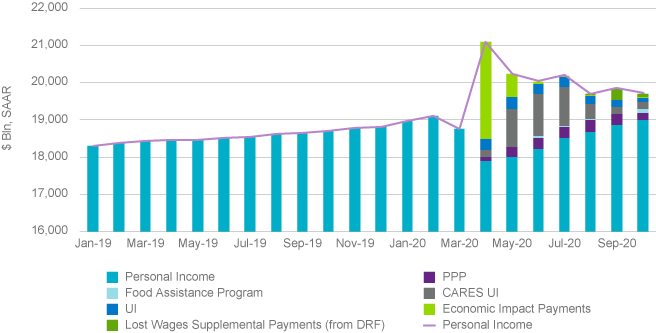 Also note the orange bar – Economic Impact Payments – the stimulus checks mentioned above. That orange bar was largely paid for by existing US Treasury proceeds, as well as the net new bond issuance. The concept of personal income here is crucial – reiterated by the chart below. Here, the purple line indicates income that was replaced by the government. The blue indicates what would have been lost had the government not stepped in to provide assistance. The big takeaway is that we are converging back to trend – indicated by the green line. This means that all of this aid money has simply replaced what was lost from a spending perspective. No net new addition to personal income, no new spending power.

Biding Time
While it might be true that “inflation is always and everywhere a monetary phenomenon,” if no one does anything with that money, how can it create inflation? You can lead a horse to water but you can’t make it drink. The Fed can lend, but it can’t spend. Ultimately, US consumers and businesses can do three things with this money – spend it, save it, or invest it. Spending it could lead to inflation. Investing it could lead to asset inflation. Saving it could lead to a lumpy mattress.

As of mid-December, all of this money that is out there isn’t being used. Yes, income has been replaced and the US consumer has been made whole. However, this is not inflationary, because spending is not above and beyond what it was – and it looks like this trend is not about to change. Instead, the result has been a savings buffer. People are scared about the future, so they are building their savings to protect themselves – and increased savings are deflationary.

The following chart provides an even narrower snapshot of M1 – US personal savings – checking account deposits at your local bank.

Now, you might ask, “Hey, if we were simply replacing lost income, why has personal savings exploded?” Two reasons. One, savings rates naturally rise in recessions as consumers pare back unnecessary expenditures. The second reason relates to the nature of the Covid-19 public health and economic crisis, which resulted in a significant bout of forced savings. Even if I wanted to go out and ring up a huge restaurant and bar tab or buy front row concert tickets, I couldn’t. I was locked down. So were you. The key here is that income replacement got us back on trend, but has not resulted in a permanent shift higher in the personal income. What’s more, if the money supply is not being used, how is it inflationary? People are instead using it to pay down debt – think loans and credit cards – which, like increased savings, is deflationary.

Apples and Oranges
We should also keep in mind the long-term relationship between money supply and inflation. In a word, it’s terrible. As the chart below shows, we’ve seen plenty of spikes in M1 over the past 20 years and not much has happened with inflation – indicated here in blue.

The upshot is that credit and money are available, but people aren’t using it. Just because it’s there doesn’t mean anything. Until the money supply gets put to use, then it’s tough to see inflation. But what would change this inflation outlook? For one, more government spending financed by Fed bond purchases.

There’s an important point to be made here about quantitative easing (QE),1 which has developed into a blanket term but can in fact have very different mechanical meanings. Not all QE is the same. During the 2008 Global Financial Crisis, purchases of government bonds by the Fed were used as an asset swap to stockpile bank reserves. In this case, the Fed buys Treasuries from banks and credits them reserves – but those reserves cannot leave the Fed Funds system. The Fed Funds system is a closed loop – bank reserves are used as a means to clear transactions between banks. This money cannot be used elsewhere and it is not used by the general public. QE increases the money supply in this instance, but it doesn’t get lent or spent unless there is a demand for loans. In a broad sense, QE of 2008 was just a straight asset swap.

The current incarnation of QE is different. This time around, the banks aren’t the intermediary. The Treasury is handing the money to the government – and the government is spending it. The fancy way to describe this dynamic is “coordinated monetary and fiscal policy.” Why is this such an important difference? Because the government will gladly spend this money, not hoard it. As described above, it is being used to replace lost income. But remember, thus far the government has basically spent only what the private sector has lost as result of Covid-19. The net sum is zero. If that net sum were to become positive, it’s a different story – and could change the outlook for inflation risk.

Breathe
Until then, inflation is likely just normalizing. Fits and starts may occur as a result of supply/demand imbalances created by post-pandemic consumer demand. While inflation could push higher, the Fed is not likely to abandon its new QE framework as a result – particularly when the labor market remains far from maximum employment.

The below chart depicts the Fed’s Senior Loan Officer Survey, indicating falling demand for loads. Credit is there, no one wants to use it, not inflationary.

Here’s a chart depicting Total Consumer Credit – it fell by $8 billion last month. This is deflationary.

Kicking Around
The bottom line is that expanding the money supply on its own does not lead to inflation. Inflation is likely to wax and wane in the short term as the global economy continues to normalize. Risk appetite is key, but even if risk appetite returns in force and demand for credit meaningfully picks up, there’s still no guarantee of inflation firming materially. In the lead-up to 2008, when risk appetite was running wild and credit creation was at excessive levels, we still only saw sustained inflation marginally above 2%. The preconditions for a return of inflation are certainly out there, but demand for credit needs to pick up significantly for it to become a serious concern. As of right now, we are a long way away from that world.

1 Quantitative easing (QE) refers to monetary policy in which a central bank purchases government securities or other securities from the market in order to lower interest rates and increase the money supply.

With the Creating Sustainable Value newsletter, Mirova offers you to understand the markets from a new angle and to engage in sustainable development.