Skip to main content
One risk leads to another
After deploying a military contingent of nearly 180,000 soldiers around Ukraine's borders, President Putin has considerably toughened the tone towards Kiev, accusing the Ukrainian authorities of wanting to join NATO and of posing a threat to Russia's security. On February 21st, 2022, President Putin unilaterally decided to officially recognise the self-proclaimed separatist states of Lugansk and Donetsk, a movement that took Western diplomacy by surprise and undermined the sovereignty of Ukraine. This aggression, unanimously condemned, has triggered a series of sanctions, mainly financial, against Russia. The UK announced a first round of measures targeting several Russian financial institutions as well as people close to President Putin. The US administration has banned all financial transactions involving Russian government securities. Following the UK and the US, the EU has also banned members of the Duma - the Federal Assembly of the Russian Assembly – as well as several individuals and entities involved in the crossing of Ukraine's borders. German Chancellor Olaf Scholz also asked the Federal Network Agency (BNetzA) to suspend to the Nord Stream 2 pipeline project certification.

On 24th February at 05:05, Russia invaded Ukraine and bombed several strategic sites such as Kiev’s airport and military headquarters. The Russian leader warned the West against any form of intervention and announced that retaliatory measures would promptly be taken as well. The belligerents in this crisis have entered a new cycle of confrontation with an uncertain outcome. Analysing the possible economic and financial consequences of this new geopolitical crisis is then crucial.

Europe and Russia’s mutual exposure
Despite international sanctions on Russia since 2014, the economy has proven resilient. Foreign exchange reserves reached $630bn in December 2021, twice the amount in 2014. Russia's external debt has remained stable since 2015 and the state's financing requirement has fallen considerably due to increased revenues from hydrocarbon sales. By 2021, Russia's debt-to-GDP ratio was 17.9% of GDP. On the trade front, Russia's dependence on Europe is significant. Exports to the EU account for almost a third of total exports. Although Russia is the EU's fifth largest trading partner, it accounts for only 4.8%1 of the old continent's exports. Europe therefore seems relatively immune in trade terms. However, this does not count with the energy dimension, where the European Union's dependence is considerable. Overall, the EU imports 57% of the energy it consumes, and a significant proportion of these imports come from Russia . Specifically, 24.7% of EU oil imports and 46.8% of EU gas imports come from Russia.2 These averages mask real disparities within the EU countries. Germany, for example, imports 68% of its gas from Russia, making the German economy and manufacturing sector particularly vulnerable to any unilateral decision taken by Moscow.

While the scenario of a total disruption of energy supplies appears unlikely, a significant increase in prices is likely. Our assessment shows that a 15%3 shock to the price of energy (proxied by the price of Brent crude oil expressed in Euros) has an average impact of 0.2 percentage points over a 12-month period on the change in the Eurozone harmonised consumer price index (HICP). However, although this positive effect on inflation gradually fades over time (see Figure 1 below), the exogenous nature of this shock may quickly induce an overreaction of energy prices and weigh on economic agents' confidence and economic growth. Overall, we believe that a rapid resolution of this crisis is unlikely and that it will keep the oil and gas prices on which we depend under pressure. 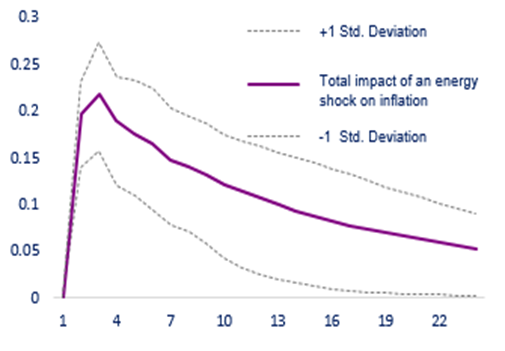 Reduced market visibility
Market reaction has been tumultuous. On 24th February, European equity markets fell sharply, and the implied volatility derived from the Eurostoxx 50 option markets (the V2X index) hit a 40% level which corresponds to a crisis level. Month to date, European and US equity markets have fallen respectively by almost 8.5% and 6%, polluted by a lack of visibility generated partly by this major political crisis. In this context, government bond yields have fallen, and the US dollar benefitted from its “safe haven” feature and strengthened against all currencies. However, interestingly we note that interest rate reaction has been relatively modest compared to the nature of the crisis. Rates remained under pressure in several fronts: from a possible increase in inflationary risk explained by higher energy price (see Figure 1) and from central banks that have announced the normalisation of their monetary policies. We believe that these pressures remain on the agenda for the coming weeks. However, the current backdrop is likely to influence the behaviour of central banks, and potentially interfere with their monetary tightening schedules.
1 Sources: European Commission (Data as of H1.2021)

3 We use a VAR(p) model. We simulate a one standard deviation shock to energy prices and calculate the response of European headline inflation.

This material is provided for informational purposes only and should not be construed as investment advice. The views and opinions are as of February 23, 2022 and may change based on market and other conditions. There can be no assurance that developments will transpire as forecasted, and actual results may vary.

How to navigate 2023 for investors and what is the outlook for growth stocks? Hear from Karen Kharmandarian, CIO, Senior Portfolio Manager, Thematics Asset Management.